When I receive requests for photos and information on ships and shipping from times past, I am always happy to share what I have on file. In recent weeks I have received one of particular interest, going back forty-five years.

A well known shipping company, based in La Have, Nova Scotia, was owned by several generations of the Himmelman family. Originally founded, I believe, by Seth Himmelman, it later came to be operated by Ernest Himmelman and Arthur Himmelman.  The company operated under a number of names including Himmelman Supply, La Have Shipping and individual one ship companies. The latter took on the unusual name of O.K. Service.

Over the year the Himmelmans owned nearly a dozen ships, all with the name O.K.Service, and all but the first and last with a number.

Starting in the  late 1920s, the first ships were all wooden hulled coastal cargo vessels built with schooner type hulls, and the low profile of the rum runners of the era. The boats traveled widely - as far as Labrador in season, the US east coast and the Caribbean, generally in the fish trade. That included salt fish, raw salt, rum (legally), and in later years explosives. 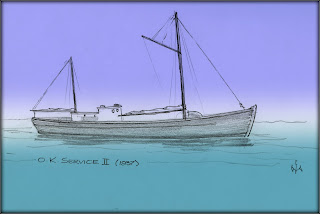 Until the late 1940s these vessels were always small, well under 150 gross tons so as not to require a licensed master. They owned eight of these, and after the first, all with roman numeral numbers, II through VIII.

This move allowed the company to accept charters such as Department of Transport Northern Supply and work for Shaw Steamships to the Caribbean. 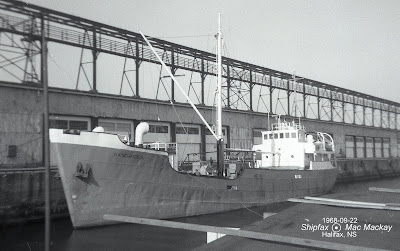 By 1968 the ship was looking a little rugged, and the Himmelman's sought a replacement. That proved to be O.K.Service XI, built in 1950 by Canadian Vickers in Montreal as Carabobo, one of a series for South American service. 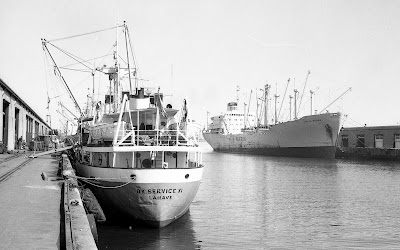 It saw service in the usual trades, but also charters to Newfoundland Canada Steamships. However it was sold in 1972. They continued to operate number X until 1975 when they acquired their last ship. They named it OK Service (with no number).

They did not sell O.K.Service X immediately however it was registered in the Bahamas and was eventually laid up in LaHave until sold in 1975. New owners, Galleon Shipping Ltd of Florida, renamed the ship Barma and it set sail from La Have on January 17,1975. on January 22, while about 200  miles east of Boston, in severe weather, they ship began to take on water and took a severe list. 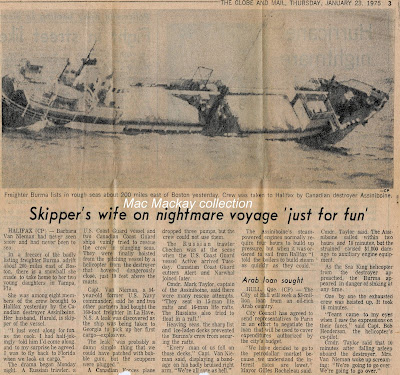 Canadian Press got the ship's name wrong - it was Barma not Burma, and the owner's name was spelled Van Niman. However they did get the photo - possibly from the military.

Although the term is overused, there is no doubt that it was a dramatic rescue, conducted by RCN Sea King helicopter from HMCS Assiniboine that lifted off the crew, including the owner/skipper's wife.  CCGS Alert, CCGS Narwhal, USCG Active and a USSR trawler named Chechen all participated in the operation.

Once abandoned the ship remained afloat for a time and was last seen January 26, 1975.

Himmelman operated their last ship until it was finally sold in 1985 after some years in layup.