Shipping companies are much given to initials as a convenient form shorthand.

That is certainly the case with Mitsui OSK Lines, tracing its origins to 1884 when OSK conglomerated a large number of smaller companies. It is still one of the large Japanese shipping lines, even though it has divested its container ships to the Ocean Network Express. Those ships have maintained their MOL identity by name and colour scheme, although that is expected to disappear over time as new ships are delivered or as existing ships are drydocked. 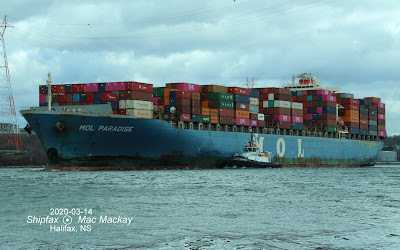 Canada Steamship Lines has a similar background. Formed from the combination of several other lines in 1913, its roots go back to 1843. It has been known as "CSL" since early days, but ships did not start carrying the CSL prefix until the late 1900s.

CSL Tacoma arried this morning to load gypsum. The Bahamas flag self-unloader was built in 2013 by Chengxi Shipyard in Jiangyin, China. The 43,691 grt, 71,552 dwt ship works for CSL Americas as part of the CSL self-unloader pool with Algoma. The foreign flag ships carry "CSL" initials on the hull whereas Canadian ships have the name spelled out in full.

Both ships are members of the so called Trillium class but are very different in most respects.

Another set of initials, but with much more recent roots, were seen at the other end of the port. RHL Agilitas operates a feeder service between Halifax and Kingston, Jamaica for ZIM. The 18,480 grt, 23,664 dwt ship has a capacity of 1732 TEU and carries a pair of 40 tonne capacity cranes. Built in 2007 by Guangzhou Wenchong Shipyard, it was launched as Wilhelm Busch but was soon renamed with the "RHL" prefix, denoting the newly formed Reederei Hamburg Lloyd. 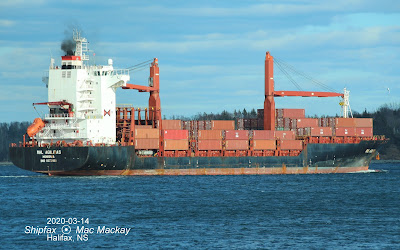 Not to be confused with HAPAG Lloyd (itself an acronym) RHL owns about a dozen tankers and sixteen container ships.

Initials seem sure to continue in ships names in the Age of Acronyms, but there will still be lots of variety after abbreviations.