Basin boats, and cars and boxes

There is no particular theme to today's post - it is more a random collection of my observations.

There was lots of room in Bedford Basin for various activities. HMCS Fredericton moved, with tug assistance, from HMC Dockyard to the Bedford Magazine (Jetty NN) and HMCS Moncton took up an anchorage position not far away. 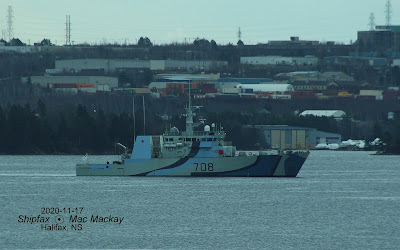 Moncton is still wearing its commemorative paint scheme marking the 75th anniversary of the end of the Battle of the Atlantic in 2020. Bedford Basin played a critical role in that battle as it was a marshaling point for ship convoys. Naval escorts and some other ships were painted in a variety of schemes to confuse or mislead the enemy about the ship's position, direction of travel or speed.

Also in the Basin for some form of trials was the newest vessel in the Fisheries and Oceans fleet based at the Bedford Institute. CCGS Capt. Jacques Cartier was delivered earlier this year by Seaspan and has already conducted several scientific missions.

I earned a stern rebuke some time ago for stating in a previous post that new Canadian ships are too small, but they certainly appear stubby compared to the ones they replace. I am sure they are technically advanced, seaworthy and packed with all necessary equipment, but they are not as aesthetically pleasing as ships of yore. [I am a charter member, and currently the only surviving member (as far as I know), of the Canadian Committee on Aesthetic Responsibility and am therefore qualified to comment.]
On the west side of the Basin at Mill Cove the tour boat fleet has settled in for the winter. 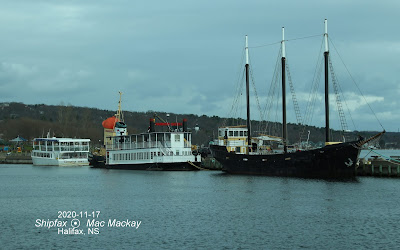 From left to right these are:
Kawartha Spirit - returned from Lunenburg and laid up. It did not operate in Halifax during 2020.
Theodore Too - laid up and apparently still for sale.
Harbour Queen I - did operate tours in 2020 and provided ferry service to George's Island.
Silva of Halifax - also operated in 2020 giving harbour tours.
Anchored in Mill Cove is the schooner Katie Belle . It appears that they crew went ashore without stowing sails. It made one trip to sea during 2020 - September 19 to October 19. See: September 19 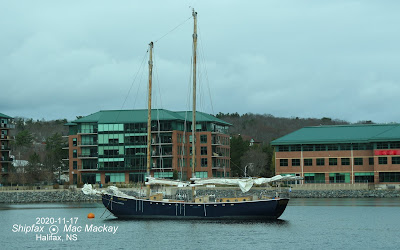 It certainly did those sails no good if they were left that way for a month.

Outbound rounding Ives Knoll, the Viking Queen leaves lots of room for Dominion Bearcat doing some sort of work off Pier 20-23.
And as an update on the demolition work at the former Foundation Maritime dock (latterly Svitzer Canada) - the salvage pier has been completely removed, and the "cook house" has been removed from the main pier. Work has now started on dismantling the main pier starting with the guard rails. 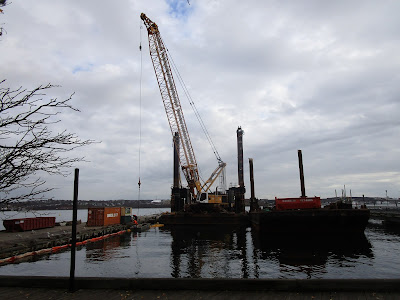 The crane barge Canadian Argosy removes material and places it on the deck barge VM/S 87.
(The name painted on the barge is "VMS 087" but that is incorrect.)