The CCGS Jean Goodwill, the second of three "interim" icebreakers acquired by the Department of Fisheries + Oceans for the Canadian Coast Guard, reached its home port of Halifax today. The ship sailed from Lévis, QC earlier in the week after a two year conversion process to transform it for Canadian duty. 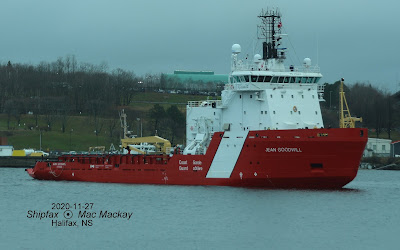 Built by Havyard Lervik, Norway in 2000 it was originally named Balder Viking as an icebreaking anchor handling tug supplier. The 18,020 bhp vessel was built for severe arctic conditions and apparently proved itself over the years. In 2018 the Canadian government purchased the ship and two sister vessels [see below] to meet an urgent need for icebreaking capacity while older ships undergo life extension and eventual replacement. Chantier Davie Canada Inc, with its shipyard in Lévis (opposite Quebec City) did the deal for the acquisition and conversion. 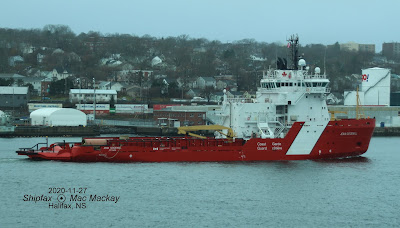 Conversion work included additional accommodation, and what appears to be an extension to the stern (and removal of the stern roller).

The first vessel in the series, the Vidar Viking was pressed into service last winter as CCGS Capt. Molly Kool without undergoing a complete conversion process. It has now returned to Davie for completion of that work. Work is underway on the third vessel, Tor Viking II to be named CCGS Vincent Massey.

Today was my first chance to get a good look at one of these vessels, although I did witness their arrival in Canada in August 2018. Their passage up the St.Lawrence River was shrouded in dense fog, so what I saw was somewhat restricted! 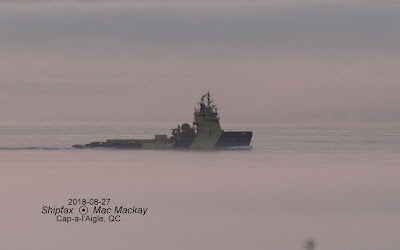 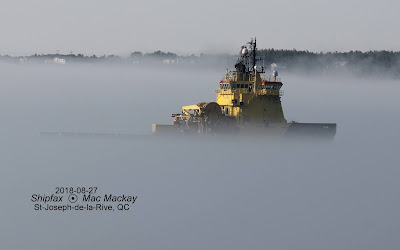