The bunkering tanker Algoma Dartmouth arrived at Imperial Oil dock #3 in Dartmouth in the wee hours of the this morning November 18. It is the first time the tanker has been back in its namesake port for just over two years. 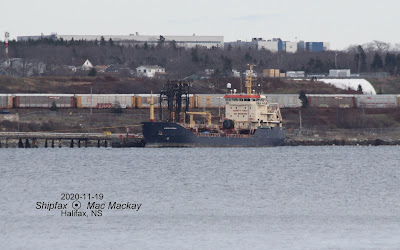 The ship was built in Tuzla, Turkey  in 2007 as Clipper Bardolino, but was renamed Samistal Due in 2008. Algoma Tankers chartered the ship in 2009 and stationed it in Halifax as a bunkering tanker, with fuel supplied by Imperial Oil. When legislation regarding import duties was changed in 2010, Algoma purchased the ship outright.

Imperial closed its Imperoyal refinery in 2013, reducing its facility on the Dartmouth side of the harbour to tank storage for the local market. In 2014. Algoma began to source ships bunker fuel from Sterling Fuels, part of the McAsphalt / Miller group. However that agreement expired late in 2018. At that point Algoma reached an agreement to move the tanker to Saint John, NB and to source fuel from Irving Oil.

Algoma Dartmouth sailed from Halifax November 8, 2018 and had not returned until today. During that two year period the port of Halifax has been without a re-fueling afloat capability (except for the Royal Canadian Navy and even that is rarely used, as ships must move to the tanker Astrerix at its berth.). Ships now must come alongside commercial piers to refuel from trucks or dock at Irving Oil's Woodside terminal. It is also believed that Imperial Oil no longer not stocks marine grade fuels in Dartmouth, and its docks were not set up for refueling. Only Irving Oil fuel is available by truck.

Algoma Dartmouth found some work in Saint John, but with the cancellation of the cruise ship season this year business was much reduced.  On November 3, 2020 the ship sailed from Saint John for Sydney, NS, arriving there November 5, for what was thought to be a winter layup.

Now its arrival to load fuel cargo, apparently for Sydney, NS suggests that a new arrangement has been made to keep the ship operating as a shuttle.

The lack of refueling afloat by means of bunkering tanker has apparently not hurt the prospects of the ports of Halifax or Saint John. Most large container shipping lines, with regular routes, contract well in advance for fuel and use such mega ports as Singapore, Rotterdam, Gibraltar or New York, close to competing refineries, to refuel. Large tankers have immense fule capacigties and other ships seldom run low or run out of fuel these days, and shipowners can plan well in advance for their fuel requirements.

When Algoma Dartmouth left here in 2018,  I did several posts on the subject of bunkering in Halifax. See: November 7, 2018

Bunkering tankers are called "barges" even though they may be self-propelled. This is a carryover from the days when the fuel (oil, but before that coal) was delivered to ships by non-propelled barges. In fact Halifax used barges until the mid 1970s. One such barge was I.O.Ltd. No.6. See more: here 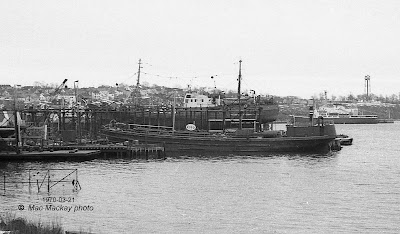 Seen here at Dartmouth Marine Slips it served Saint John for many years until transferred back to Halifax. It was moved around by tug. [Full marks if you identified CCGS John A. MacDonald in the background.]