The Port of Halifax is seeing the usual arrivals and departures and some unusual ones.

Boreas arrived at Pier 28 this morning, likely for bunkers, however it also seemed to attract the attention of the Canadian Border Services Agency. It is a little late in the season for Asian Gypsy moth inspection,  since they are thought not to hatch in cold weather. 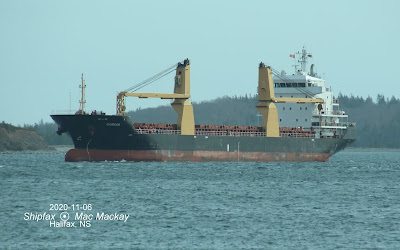 The ship was built in 2008 by Chongqing, Dongfeng, China and is a general purpose cargo/bulker with two 45 tonne capacity cranes that can work combined for a 90 tonne lift on a single spreader.The 6569 gt, 8090 dwt vessel started life as BBC Tunisia, but became Qing Hua very soon after delivery when current owners Boreas GmbH acquired the ship. In 2010 was renamed Thor Boreas and took its present name in 2014.

The ship's last port was Santiago de Cuba and it appears to be in ballast.

Across the camber Augusta Luna is also in from Cuba (it arrived yesterday) unloading another cargo of nickel sulfite in bags. 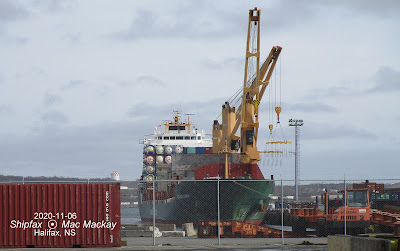 Longshore workers are on lunch break and the spreaders for the nickel bags are suspended in mid-air.

Built in 2011 by Xinshun Yueqing in Wenzhou, China, it is a 12,772 gt, 17,370 dwt multi-purpose ship, strengthened for heavy cargoes. It carries a pair of 150 tonne cranes that can work in combination for a 300 tonne load. Its container capacity is 894 TEU (504 on deck and 390 below) (or 903 according to its operators) but that decreases to 698 TEU if they are loaded at 14 tonnes. It also has 60 reefer plugs. Originally named Lolland, on delivery it was renamed Rickmers Yokohama then took its present name in 2015.

The ship operates for the Dutch company Nirint Shipping BV with container and general cargo from Rotterdam and Bilboa to Curacao and Cuba. Does the number of liquid bulk containers on deck suggest a thriving rum trade?

PSA Halifax is using the full length of the extended berth at Pier 42, as Skogafoss completed loading. 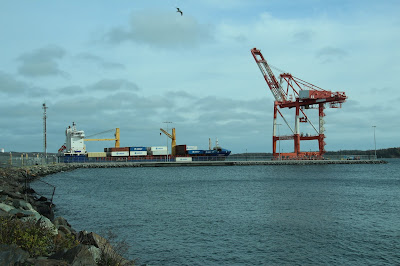 Although not ideal for photos, it does show most of the ship. 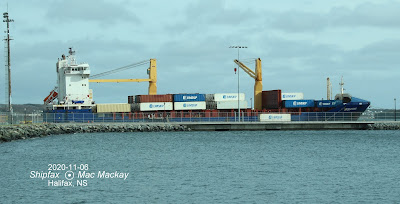 Also a Chinese built, German ship, it came out of the Sainty Jiangdu yard in 2002 as Ice Bird. A 7545 GT, 8209 dwt ship, it has a capacity of 698 TEU. Chartered by Eimskip as Skogafoss since 2011 the ship is one of three ships on the weekly service between Iceland and Portland ME, that also provides a feeder service for lines from Halifax. (It doesn't appear to have any takers today.)

For something completely different, the crude oil tanker Front Cosmos has taken up position deep in Bedford Basin, in the long term anchorages. 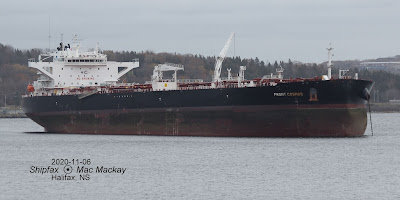 The 82,515 gt, 157,528 dwt ship was delivered by New Times Shipbuilding Co, Jingjiang, China in 2017 and is operated by the former Norwegian (now Cypriot) billionaire John Fredriksen's giant Frontline tankers - the largest tanker fleet in the world. It is perhaps as well that John has very deep pockets, because the crude oil tanker business is in steep decline, with demand and rates tanking (sorry) thanks to COVID-19.
The ship arrived off Saint John September 26, and did not unload at Canaport until November 3. It now has no immediate prospects for work and may be idle for some time.
With crude prices very low, some refiners bought up supply, but with poor demand for product, they are storing the crude on tankers all around the world, since there is limited storage for refined product. Once unloaded the crude ships at idled. There are reported to be 2,464 tankers larger than 80,000 dwt, with 37 more to be delivered from shipyards. Despite the fact that 120 of the ships are more than 20 years old, only 11 tankers have been scrapped in 2020. Owners are clearly expecting a return to "pre-COVID" in 2021, but if that does not happen, expect even newer ships to go under the torch. In the meantime the big ships are laid up wherever they can find space.
.