There was a lot of activity in the harbour as the port caught up with weather delays. Very high winds starting yesterday resulted in suspension of pilotage operations until this morning when ships began to sail and arrive again. Most of the arriving ships had spent the night circling offshore waiting for the pilot boat to resume operation.

Among those sailing was the MOL Emissary a familiar caller for THE Alliance. 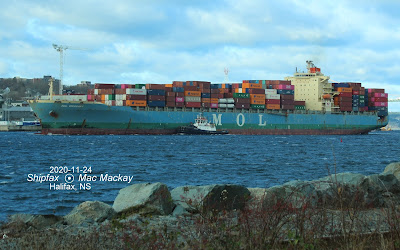 Built in 2009 by Hyundai, Ulsan the 54,940 gt, 67,170 dwt ship has a capacity of 5087 TEU including 330 reefers. As the ship is on long term charter from Seaspan Corp, it may well serve out its charter in MOL colours rather than take on the ONE magenta hull paint that owned ships would get.
Among the arrivals this morning was the Wallenius Wilhelmsen Titus which went first to Pier 31 to unload special RoRo cargo. It will shift to Autoport this evening to discharge cars. 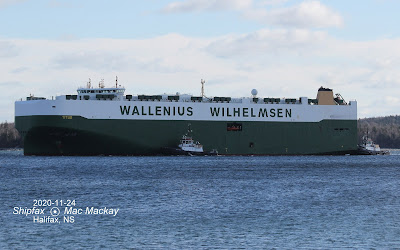 The 73,358 gt, 23,889 dwt ship, with a capacity of 7656 cars, built in 2018  by Tianjin Xingang, is among the last to be delivered in the old paint scheme of its Wallenius parent.  Since mid 2019 ships are being painted in a new scheme of the merged Wallenius Wilhelmsen Ocean. Wilhlemsen ships were red/orange and Wallenius were green. The ships still retain the traditional naming themes, with Wilhelmsen ships beginning with the letter "T" and Wallenius named for operatic characters (some of whom have "T" names.)
There was lots of traffic for National Gypsum today too. Algoma Verity docked on arrival from Tampa. A familiar caller since it was built in 2000 as Alice Odendorff it was renamed in 2019 when Algoma acquired the three Oldendorff ships in the CSL self-unloader pool. 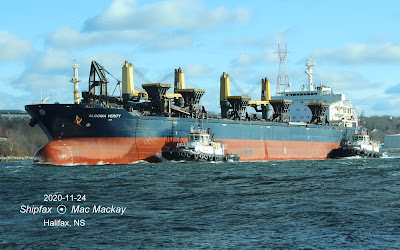 The 28,747 gt, 47,404 dwt ship is readily identifiable thanks to its unusual crane/ conveyor/ hopper self-unloading system. It was built by Shanghai Shipyard as a conventional four crane bulker, with the conveyor/hoppers added as a conversion.
A stiff northerly breeze across the Basin meant a wet ride for the tugs' deckhands. 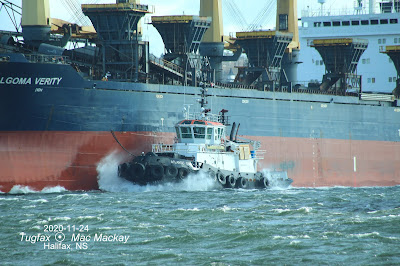 Next in was Algoma Integrity from Baltimore. It was last here November 15, so I will not repeat its details. 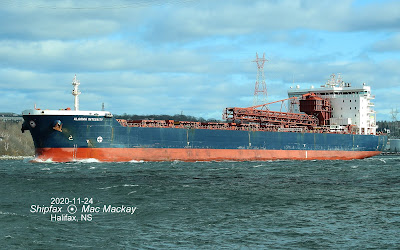 With Algoma Verity along side at National Gypsum, Algoma Integrity will cool its heels at anchor until the berth is free. 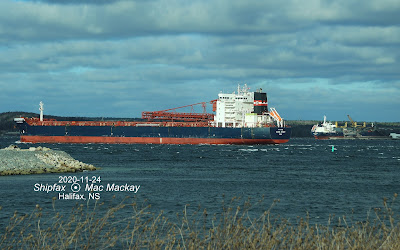