The former Royal Canadian Navy dive support ship HMCS Cormorant has often been in the news - perhaps more in its post navy days than before, but even then it made the headlines from time to time.
It has also appeared on this blog: http://shipfax.blogspot.com/2019/12/cormorant-another-chapter.html

Built in 1963 as an Italian fishing trawler named Aspa Quarto it was brought to Canada, and converted  to house and support a remotely operated diving vessel, and to accommodate a mixed-gender crew for a time. Some questioned the high conversion cost, and the RCN's decision to buy second hand. The ship's diesel electric propulsion system was certainly one of its major attributes however. Three Marelli-Duetz engines provided power to the motor driving a single shaft with controllable pitch prop, giving an almost infinite power range up to 1800 hp. 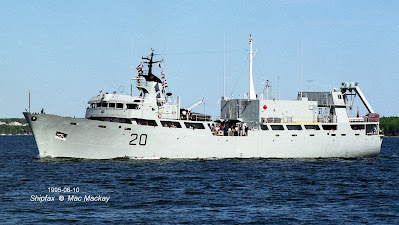 The ship made numerous notable diving forays, including those to the Arctic and Great Lakes where it located the wrecks of Breadalbane and Edmund Fitzgerald (respectively).

Once decommissioned in 1997 the ship languished until sold to US interests. It eventually wound up Bridgewater, NS in 2000. A project to convert the vessel for expeditions stalled and it was essentially abandoned. In perilous condition it has leaked, listed, sunk and been a general eyesore for years. Finally in 2019 new federal legislation allowed the government to step in, take control of the ship and arrange to have it removed and scrapped. 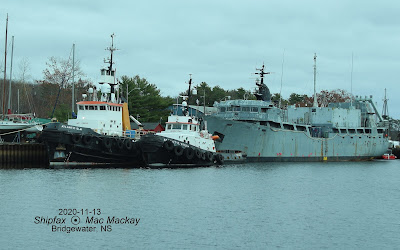 Early this morning the Atlantic Towing Ltd tugs Atlantic Elm and Atlantic Beech arrived in Bridgewater to tow the derelict away to Liverpool*, NS where it will be broken up. Work is ongoing to make the ship seaworthy enough for that short trip, which was due to take place today, but had not happened by night fall.

The federal government must assume the $1.87 mn demolition cost (plus some previous clean up and repair costs) unless an owner can be identified and held responsible.

*  R.J.MacIsaac Construction Ltd had a ship demolition facility at Brooklyn, NS (adjacent to Liverpool, NS) at the site of the former Bowater Mersey Paper Co. The company broke up former RCN ships at the site.

The company has now established a new facility in Sheet Harbour, NS.