Before De Caprio there was Da Vinci, one of the great minds of all time. It was therefore no wonder that the Italian Line chose the name Leonardo Da Vinci for the replacement of the ill-fated Andrea Doria. When it was completed in 1960 by Ansaldo, Sestri Ponente, the writing was already on the wall for transatlantic passenger travel, and in fact this 33,340 gt ship was the last Italian liner on transatlantic passenger service. It served with the Cristoforo Colombo which was retired in 1973 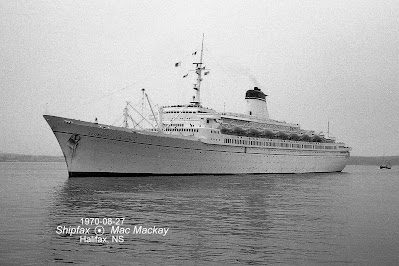 Powered by four steam turbines, the ship could attain 23 knots. It was said that the ship was built to be converted to nuclear power, however that never took place. In 1977 the ship did some cruising but its third class accommodation was too spartan to appeal to tourists. With capacity reduced from 1326 to 984, it did not make enough to cover costs. The ship was laid up in La Spezia in 1978.
On July 3-4, 1980 an uncontrollable fire resulted in the ship capsizing. It was righted but was not repaired, and was scrapped in 1982.

I took this photo in August 1970 as the ship was inbound to Pier 21 in Halifax, still on liner service. To my mind more beautiful than most of today's cruise ships.