Container Lines are fond of naming ships after cities - usually ports - but also those  centres where cargoes may come from or are destined for. Three arrivals today more or less fill those categories.

Kyoto Express (pictured during its August 20, 2020 visit) called in at Cerescorp's Fairview Cove terminal. It is just about as big a ship as the facility can accommodate due to bridge clearances. A 93,750 GT, 103,890 dwt ship it has a capacity of 8749 TEU, including 750 reefers and was built in 2005 by Hyundai Heavy Industries in Ulsan for HAPAG-Lloyd. Named for Japan's "second city" Kyoto was once the country's capital, it is now the cultural capital, but with neighboring cities of Kobe and Osaka it is also an important industrial hub.

At the southend terminal, PSA Halifax, APL Miami made an early afternoon arrival.

It is named for Florida's largest city, the centre of much of the state's commerce and a significant port. With a capacity of 9200 TEU, the ship is just under the "Ultra" class of 10,000 TEU. Nevertheless it is a sizable vessel of 109,712 gt, 109,712 dwt. Daewoo Shipbuilding and Marine Engineering Co Ltd, Okpo delivered the ship in 2014. Owners APL (American President Lines) merged with Neptune Orient Lines (NOL), in 1997 and in 2016 CMA CGM acquired 100% ownership of NOL so that APL is now a wholly owned subsidiary of CMA CGM.

Autport's arrival is named for Canada's largest city, and thus a major market for the automobiles that Toronto carries. The ship operates in the now merged Wallenius Wilhelmsen Ocean fleet, but it was built, and is owned by Wilhelmsen Lines. It is that company's policy that all its ships names began with the letter "T". 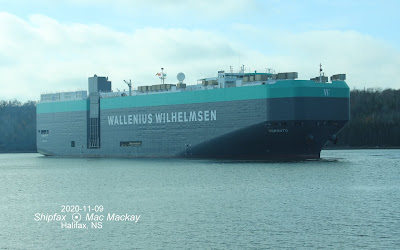 Mitsubishi Heavy Industries, Nagasaki delivered the 61,482 gt, 19,628 dwt ship in 2005 as a Pure Car and Truck Carrier, with RoRo capability for other cargoes. The ship has a capacity of 6,354 RT43 car equivalent units.

Wilhlemsen has been hard hit by the drop in demand for vehicles brought on by the pandemic. Up to ten ships were to be put in cold layup in June to reduce the ship's fleet operating costs, and others will be redelivered to charterers. Another four or five ships, more than 24 years old, were to be scrapped. Cold layup, where machinery is not operating, nor maintained, can save US$3000 to $4000 per day, but requires significant outlay to re-condition the ships the longer the layup goes on.