ONE Maxim shows up

I am not sure when the novelty of Ocean Network Express ships painted in vivid magenta will wear off - not for a while I guess. As each ship is repainted or new ones delivered, it is still a shock to see a ship with such an "un-ship-like" paint colour.

Today's arrival at Cerescorp, Fairview Cove did not attract as much attention before August of this year when it sailed as MOL Maxim for Mitsui OSK Lines. Built in 2010 by Mitsubishi, Kobe, the 78316 gt, 79,373 dwt ship, with a capacity of 6724 TEU, including 500 reefers, was painted in MOL's standard blue hull paint. 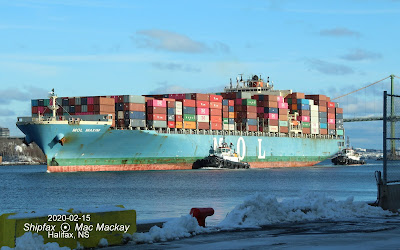 As the ship appeared in Halifax in February its hull paint looked a tad seedy, but as it was coming up on its ten year survey, it was expected to get a thorough overhaul, including a new paint job.

The ship apparently went in for refit in the summer and emerged in the colours of ONE, the entity that was formed by the major Japanese container operators, NYK, K-line and MOL to combine their operations. 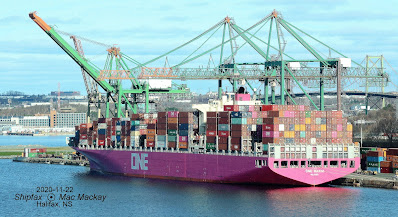 There are ten sister ships of the MOL "M" class, and several are sailing for The Alliance shipping combine. As they all go through their refits and emerge in magenta, they will continue to attract attention. MOL Maxim arrived in the dark and sailed at dusk so photo opportunities were limited, but it will be back.