Saturday after the blow

Some windy weather blew through Halifax over night last night (November 13-14) resulting in suspension of pilotage assignments until this morning when things calmed down. It was therefore quite busy in the harbour for a time. In no particular order:

Nolhan Ava remained in port over night, but got away this morning on its weekly run to St-Pierre et Miquelon and Argentia, Newfoundland. 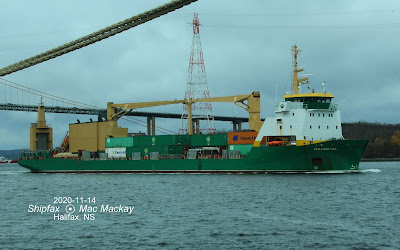 Nolhan Ava moves smartly through the Narrows outbound for sea.
A headline from the cable ship IT Intrepid frames the top of the photo.

The ship was built in 2011 by Mitsubishi Heavy Industries in Kobe. It is still wearing Mitsui OSK Lines colours and it will be interesting to see what happens at its next drydocking if it is renamed and repainted for ONE. (If it is a chartered ship it may not adopt the new livery.) 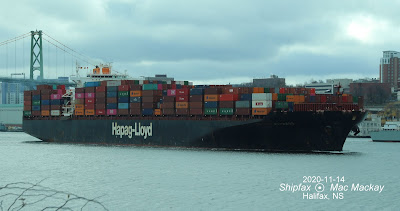 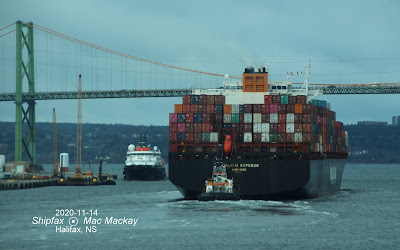 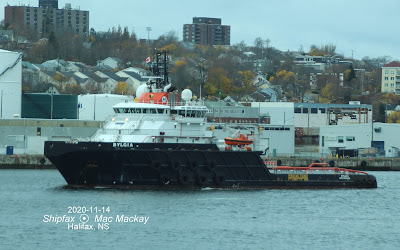 The 16,000 bhp tug, which arrived November 11 from the Netherlands is en route to Chedabucto Bay where the crane rug Thialf is anchored after completing most of the removal work for the Sable Offshore gas installation. The tug was here previously in April accompanying the rig on its arrival. See: http://tugfaxblogspotcom.blogspot.com/2020/04/bylgia.html

While looking over the Narrows, HMCS Charlotteotwn moved from the Graving Dock at Halifax Shipyard yesterday after a lengthy refit. 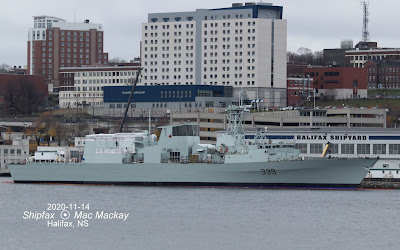 During its drydocking it was completely cocooned and recoated under cover, so looks quite pusser now. It will remain alongside the Machine Ship Wharf until completion of other work.

There was activity in other parts of the harbour as well. The Acadian departed Irving Oil Woodside making room for the arriving Ardmore Sealancer from Rotterdam. 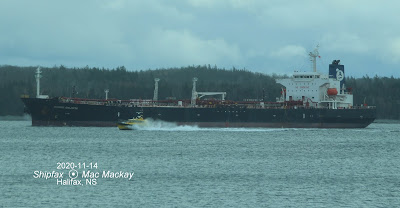 The ship carries the distinctive larger funnel of Japanese-built product tankers. (Korean-built tankers generally have squatter funnels). This one came from Onomichi Zosen as Challenge Pearl in 2008.     The 26,897 gt, 47,451 dwt ship received its present name in 2018.

At PSA Halifax Oceanex Sanderling was back for its second trip this week (see previous post) before moving over to Autoport again. The crane that used to work the ship at pier 36-37 is gradually disappearing as demolition crews pick away at it: 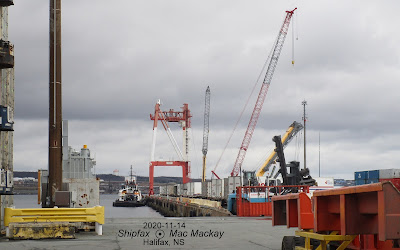 Atlantic Fir waits at pier 37 between assignments this morning while there was no demolition work going on.