Eimskip, the Icelandic shipping company was the subject of good news and bad news this week.

First the good news: The line was selected to deliver a Christmas tree from Nova Scotia. Since 1971, the people of Nova Scotia have sent a giant tree to Boston as thanks for the vital aid Boston sent to Halifax immediately after the Halifax explosion of December 6, 1917. A special train, loaded with supplies and carrying doctors and nurses was dispatched from Boston the day of the explosion. The tree is erected on the Boston Common and the illumination is a much anticipated annual celebration.

This year, instead of sending the tree by truck, it left Halifax today, November 18, aboard Eimskip's EF Ava on its regular feeder run from Halifax to Portland, ME, Eimskip's US terminus. It will then be trucked the short distance to Boston. 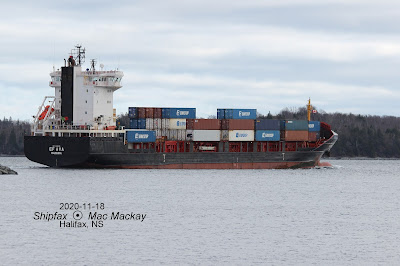 Eimskip is taking delivery of new owned ships, which may mean replacement of some of the chartered ships we see in Halifax. EF Ava, a charter, was launched by Fujian Mawei, Fuzhou in 2008 as OPDR Rotterdam and was delivered as OPDR Tanger and carried that name until 2018. The 7545 gt, 8169 dwt ship has a capacity of 698 TEU, including 120 reefers.

More Good News: The company took delivery of its newest ship in China October 9. The 2150 TEU vessel revives a name that has been used before on more than one ship, but the best remembered Bruarfoss was built in 1960 by Aalborg Verft as a general cargo / reefer, but adapted to carry containers.

The 1960 version Bruarfoss was also a regular in Halifax.
After the stylish vessel's twenty year career with Eimskip it was sold in 1980 and renamed 84: Horizon, 86: Willem Reefer, 86: Triton Trader. In December 1987 it was (safely) abandoned 300 miles SE of Halifax when its cargo of particle board shifted on a voyage from New London, CT to Ashdod, Israel. After a dramatic recovery operation, the tug Irving Miami towed the ship into Shelburne, NS December 24, 1987. In 1988 the ship was renamed Global Trader, then in 1989  reverted to Triton Trader and moved to Sydney, NS.  On April 26, 1990 it was towed out of Sydney by Pacific Rescuer. It took until August 18 to reach Alang, India where it was scrapped.
The Bad News: Eimskip currently maintains a weekly Iceland to Canada, US service with three ships, but that has now been disrupted by the grounding of Skogafoss in St.Anthony, NF on November 12. The ship had called in Halifax westbound November 6 and was on the eastbound leg of its trip after calling in Portland, ME. In high winds the ship alided with a buoy and made bottom contact, damaging several controllable pitch propeller blades and releasing oil. At first the ship went to anchor, then yesterday it docked at St.Anthony. Its next westbound voyage from Reykjavik was due to start today, but that has been canceled. 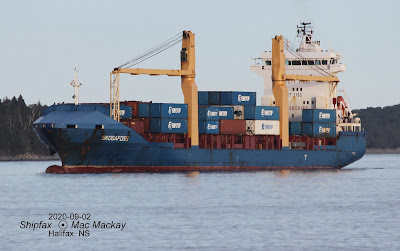 The Eimskip Green Line port rotation is Rekjavik, Argentia, Halifax, Portland, Argentia (optional), St.Anthony (optional), Rekjavik.
The next arrival in Halifax will this be Pictor, December 3, which was last here on Friday November 13. It will be followed by Lagarfoss on December 12.
The company operates other lines between Europe, Iceland and Greenland.
.
Posted by Mac at 2:13 PM