PSA Halifax is shedding another crane. After adding a new Super Post Panamax crane last summer, it appears they are scrapping the one remaining old Panamax crane. 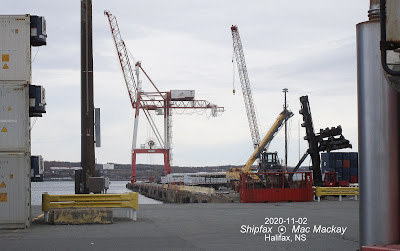 Stationed at pier 36-37, the crane appears to be the crane that was originally built to move from the Pier 41-42 pier face to Pier 36-37 thanks to a specially designed swiveling carriage. However that set up was the same rail gauge as the old Panamax cranes, now replaced with a wider gauge track. There is apparently insufficient demand for a crane at pier 36-37. Halifax's original RoRo ramp was built in the old Pier 35 / 36 corner.

The only user of Pier 36 now is Oceanex, when Oceanex Sanderling makes its weekly call. However it must move to Pier 41 to load containers and complete its RoRo loading. If Oceanex should move to Fairview to reduce truck traffic downtown, that will allow the camber can be filled in creating much more laydown area for PSA Halifax.