The Canadian National Railway, known as CNR or simply CN is celebrating 25 years as an independent company. Formed in 1919 by the Canadian government when it folded its own government railway into a mix of failing companies, it was truly a national railroad, running from coast to coast and operating in all ten provinces. (Rails in Prince Edward Island and Newfoundland have since been removed.)

In 1995 the government of Canada privatized the company and shares became available on the market. It has since become one of the most profitable North American railways, and has also expanded its reach well into the United States. That growth has fed an inexhaustible appetite for steel rail - either for new track or for upgrade / replacement. All of CN's new rail seems to come from Poland, and enters Canada through Halifax where it is stockpiled. It is then sent on special rail cars to Winnipeg where it is welded into huge lengths before being sent out for installation as "continuous welded rail".

Another rail shipment arrived in Halifax today aboard the Onego Deusto a Netherlands flagged vessel of 6312 gt, 9832 dwt. It is an open hatch type multi-purpose ship with box shaped holds and pontoon tween decks. It carries two 40 tonne capacity cranes.

The ship's hull was built by Vahali Shipyard in Belgrade, Serbia, in 2008 and completed by Volharding in Foxhol, Netherlands. Initially named Beluga Skysails it attracted considerable interest due to the large paraglider type kite which was rigged for wind assist. There are several online images and videos of the ship with the "skysail"  deployed. See: Skysail 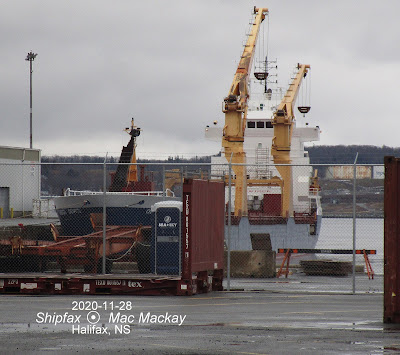 The ship tied up at Pier 27, the worst place in Halifax to take photos, but that is the pier where rail cargo is stockpiled until needed.

A black painted crane device mounted near the ship's bow was used to secure the paraglider, and remains in place, but is not likely in current use. 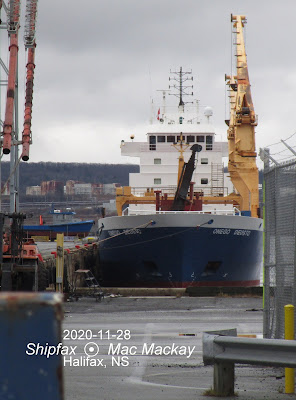 The black crane forward and amidships appears to be the telescopic jib used for the skysail.
Also at Pier 27 is the Port Authority's workboat Maintainer 1 hauled out for its own maintenance.
[See previous post,  Wednesday November 25.]

The ship's current voyage from Szczecin was not without incident. On November 7, while ten miles off Beachy Head in the Dover Strait, the ship experienced a cooling problem and had to make an emergency shut down of its main engine. The ship drifted for about half an hour while the crew effected a repair. The Dover Strait is one of the word's busiest stretches of water and such incidents have widespread possibilities for disruptions and perhaps the crew were wishing for some sail assistance at the time.