There was very little interesting commercial activity in Halifax harbour today, November 15, but it was so beautifully sunny that it seemed a shame to waste an opportunity to take some pictures even if the ships were familiar ones.

Cerescorp's Fairview Cove container terminal played host to Atlantic Container Lines' (ACL) Atlantic Sun. With its four sisters, the ship maintains a weekly transatlantic service, with east and west bound calls. After some build quality issues the ships seem to have settled in to regular and dependable service on what can be a grueling route. 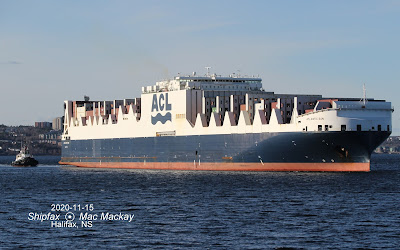 Atlantic Sun dwarfs its escort tug Atlantic Fir as it lines up to exit Bedford Basin.

Until we see these ships up close it is easy to forget how truly large they are. At 100,430 gt, 55,547 dwt they are the largest CONRO (container/Roll On Roll Off) ships in the world. The relatively modest 3810 TEU container capacity sits atop a massive amount of "garage" that can carry just about anything on wheels.

The ship arrived off Halifax yesterday but did not enter port until this morning. Since August the ship has changed flag from Great Britain to Malta. It was sailing eastbound this afternoon for Liverpool, UK. 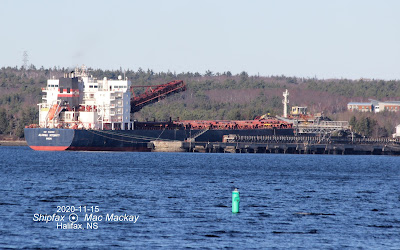 There is always some heat distortion when taking a photo across Bedford Basin.

The ship was built in 2009 by EISA-Ilha, Rio de Janeiro as Gypsum Integrity to carry Nova Scotia gypsum for the United States Gypsum Co out Hantsport and Little Narrows, NS. In 2015 it was sold after USCG's Canadian subsidiary Canadian Gypsum Co shut down its operations. It now works in the CSL Americas pool carrying all sorts of bulk cargoes including coal, aggregates and of course gypsum. The ship measures 33,047 gt, 47,761* dwt and can unload at 2,500 to 3,000 tonnes per hour depending on the cargo. (*CSL gives 46,293 as the deadweight tonnage).