Sanderliing makes a RORO only trip

Due to a backlog of automobiles destined for Newfoundland, Oceanex Sanderling made a rare mid-week, RoRo only trip to Halifax today. It usually sails on Friday with container and RoRo cargo. On this special trip it did not carry any container traffic, and docked only at Autoport. It is rare to see the ship with no containers on deck, and regrettably I did not get a photo this time.

For various reasons, Newfoundland car dealers could not get the cars they needed. With manufacturing shutdowns earlier due to Covid-19, there is a general shortage of vehicles. Also Oceanex's other RoRo ship, Oceanex Connaigra, which operates from Montreal, was in a lengthy refit in Belfast. Although some of those cars were brought to Halifax, they could not be shipped in sufficient quantity to meet demand. 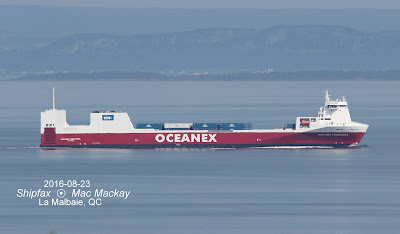 Oceanex Connaigra at speed on the St.Lawrence. (file photo)

Now that Connaigra is back in service, things are expected to return to normal.

There have been comments recently on the remarkable age of Oceanex Sanderling. Built in 1977 by Sasebo, Heavy Industries in Japan for D.D.G.Hansa as Ravenfels it was renamed Essen in 1980 and Kongsfjord in 1982. In 1983 it was renamed Onno and it was under that name when it made its first call in Halifax, substituting for ACL. 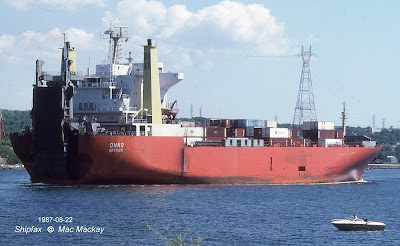 Outbound in the Narrows as Onno in 1987.

Later in 1987 it came to Canada to stay, as ASL Sanderling for Atlantic Searoute the predecessor company of the current owners, Oceanex, who renamed the ship in 2008 as Oceanex Sanderling.

For many years the ship sailed from Halifax to St.John's, then CornerBrook and back to Halifax weekly. After CornerBrook was dropped the ship has sometimes made a mid-week call in Halifax to meet demand, but usually shuttles between Halifax and St.John's once per week.