Blue was the colour of choice in Halifax today, Saturday, May 1, and thereby hangs a tail or two.

The Maersk Penang arrived at PSA Halifax this morning after sitting at anchor outside the harbour since Thursday, April 29. 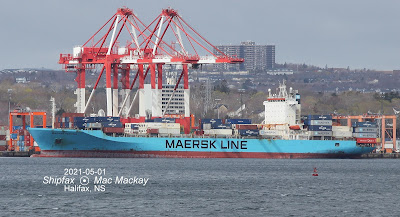 Due to labour disruptions in Montreal, the ship's normal westbound transatlantic route was changed when it went instead to Saint John, NB. However with export cargo waiting for it in Halifax, the ship then came here and anchored until picking up the normal scheduled sailing day - today.
In March, Maersk announced that the ship would make a trial call in Saint John, March 23, then Halifax March 26 (it did not) and Montreal March 29. If Maersk has been tempted away from Montreal by the Port of Saint John and CP Rail, then one wonders how long they will continue to call in Halifax.
Now that longshore workers have been legislated back to work in Montreal it may be a while before we see the resolution of this story. So far the next scheduled ship on the Maersk CAE service, Maersk Palermo, is south of Newfoundland en route to Montreal, more or less as per normal except about one day later than usual.

Cerescorp, Fairview Cove had its own blue ship today too. MOL Glide is here once again on THE Alliance's AL1 service. The AL1 service is due to end in 2Q 2021, but Halifax has been added to the AL5 service which has already started to call here, serviced by NYK ships. 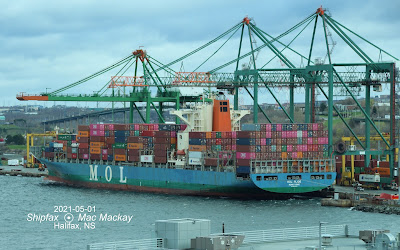 Still wearing the MOL colours MOL Glide it has not yet been repainted in Ocean Network Express (ONE) magenta as MOL's "M" class ships have.
No blue ships at Autoport today, but instead it was the green over grey Wallenius Wilhelmsen hull colour scheme of their merged fleets. Manon is one of the veterans of the fleet, built in 1999. It ranks as a regular caller, and was last here March 27, 2021. 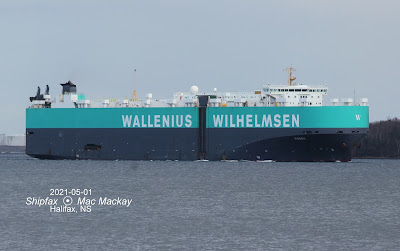 There was very bright blue at HMC Dockyard as HMCS Toronto shows off its new 'boot topping". The term is an ancient nautical one denoting the paint on the portion of a ship's hull that is usually under water. The paint is also specially formulated to discourage marine growth and is described as "anti-fouling." The bright blue paint has recently been applied while the ship has been out of the water on the Syncrolift. 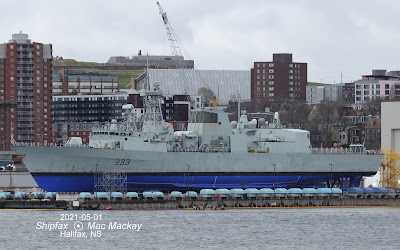 The Syncrolift [a registered trade mark] is an elevator platform that lifts ships out of the water by means of a couple of dozen synchronized electric winches (under the light blue hoods in the photo). The RCN's own ship repair unit, called Fleet Maintenance Facility Cape Scott (FMFCS), can perform a multitude of repair and maintenance chores once the ships are "in the dry".

Of note is a current tender to remove .5 meter of toxic sludge that has built up on the harbour bottom under the platform. The project, which is expected to cost in excess of $3 million, will allow the platform to be lowered to its design depth.

The last caller was another exception, because I couldn't see a spec of blue anywhere on Alpine Madeleine arriving from Antwerp for Imperial Oil. 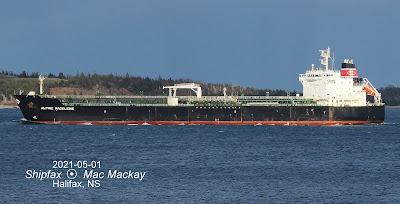 A typical MR tanker of 29,266 gt, 49,999 dwt, like scores of others, it was built by Hyundai Mipo, Ulsan in 2008. The ship is operated by Diamond S Management LLC (hence the funnel mark), a large publicly listed tanker operator with a fleet of 64 ships, 50 of which are MR tankers like this one. Diamond S recently announced a merger with International Seaways, another NYSE listed company, with mostly crude tankers, which will make a combined fleet of 100 ships. Both companies are US based.
.