Thanks to the blog Halifax Shipping News we have learned that the Minister of Fisheries and Oceans has quietly renamed CCGS Edward Cornwallis. As per yesterday's post the ship is still in refit at Shelburne, but the new name shows up on line on Transport Canada's Vessel Registration Query System. 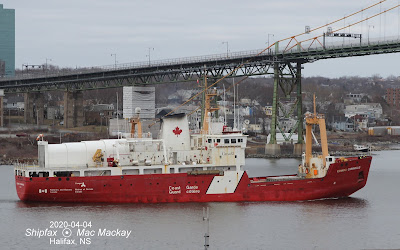 No official announcement has been made - perhaps that will await redelivery of the ship following its Vessel Life Extension refit - but the new name is listed as Kopit Hopson 1752.

As explained on Halifax Shipping News the name commemorates two signatories to the November 1752 Peace and Friendship Treaty signed by Chief Kopit of the Mi'kmaq nation and Peregrine Thomas Hopson, Governor of Nova Scotia.

As noted here yesterday the Minister stated that the new name would be chosen in consultation with First Nations.