The general cargo / bulk carrier Acadia Desgagnés arrived in Halifax May 16 for what has become an annual event. The ship is owned by the Quebec City cargo and tanker company Transport Desgagnés, and trades internationally in winter under foreign flag, and domestically in summer under Canadian flag. Its visits to Halifax each spring have been to change registration back from Barbados to Canada. The change usually occurs in April or May when the ship has completed its overseas assignments. 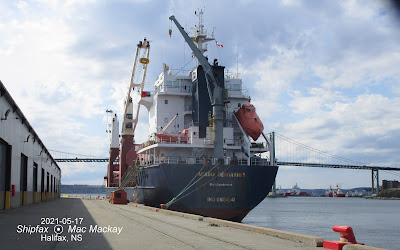 Crew members have lashed a ladder to the ship's stern in preparation for repainting the port of registry, which has been St.John's, NL annually since 2017.
After working in Canadian waters during the shipping season, it changes to Barbados registration about January 1, and trades world wide until late spring. Once back in Canadian waters it carries bulk cargoes on the Great Lakes, St.Lawrence River and Gulf and Newfoundland.
The ship's visits have been logged each spring:
2018:
2019:
2020:
.