The first of the Canadian Coast Guard's three "second hand" icebreakers arrived in Halifax May 14 for the first time. CCGS Captain Molly Kool is based in St.John's so is outside its normal territory. It is filling in on SAR duties in this area while other ships are unavailable. 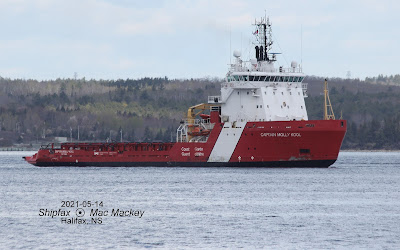 When the CCG acquired the three former icebreaking tug/suppliers from Sweden, this one was hastily put into service in 2018 and worked the winter of 2018-2019 in the St.Lawrence and Gulf. It then returned to the Davie shipyard for more conversion work.

According to press reports, the ship used its stern notch to secure the tanker Jana Desgagnes while it was towed to open water. This is the first reported use of a stern notch by a Canadian icebreaker since the days of CCGS Labrador - the last CCG ship to be fitted with a notch.

The second ship of the three, CCGS Jean Goodwill is based in Halifax, but has not entered full time service yet, with refit work continuing into June. And the third, CCGS Vincent Massey is still at Davie, Lauzon with conversion due to be completed in 2022.

Captain Molly Kool was commissioned into the CCG May 30, 2019.