Thanks to a recent re-shuffle of shipping services by THE Alliance, several once familiar ships are returning to Halifax. The AL5 service (Europe to Halifax, East Coast US, Panama, West Coast US, Vancouver and return) is using ships of the NYK Daedalus class. The ships were regular callers here on the old G5 Alliance in 2014, 2016, etc., Today's arrival is NYK Nebula a typical member of that class. 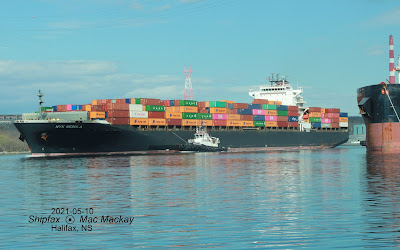 Built in 2007 by Hyundai Heavy Industries, Ulsan, South Korea, it is a 55,534 gt, 65,600 dwt ship with a container capacity of 4922 TEU. Now sailing for Ocean Network Express (ONE) it still carries the name of the pre-merger NYK Line, however the large "NYK" letters on the hull have been painted over. It is unlikely that older ships and chartered ships will be renamed or repainted in ONE's distinctive Magenta hull colour, so will still reflect their "ancestry" for some time to come.

In pre-ONE days, the ship carried the NYK Line banner on its side. There was also quite a different mix of containers, reflecting the G5 Alliance member lines.
.