MSC and Maersk in Halifax for now

While the giant container shipping lines MSC and Maersk vie for the title as world's largest (Maersk is maintaining its lead, but MSC is gaining fast) both are making their mark in Halifax, with MSC clearly ahead - thanks in no small part to the Port of Montreal.

Maersk has been an on and off caller in Halifax on its major routes for years, but for the past several years has been represented only by its North Atlantic service. Ships call - usually weekly - outbound from Montreal for Bremerhaven. There has been some interruption in the schedule over the winter and spring because of weather and labour issues in Montreal, with the ships skipping Halifax and heading directly back to Europe. Maersk operates the service jointly with CMA CGM. Maersk provides three ships and CMA CGM provides one in order to sustain a 28 day rotation and weekly calls. 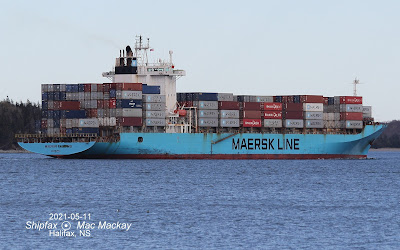 Maersk Palermo sailed from PSA Halifax this evening on Maersk's CAE service, also known as CMA CGM's St Laurent I service. The ship gave Saint John, NB as its next port. [see below]

MSC has been a much less frequent visitor in Halifax until this year when it began to send its ships here to decant or top up on cargo due to draft restrictions on the St.Lawrence River. Today there were two MSC ships, one eastbound to Montreal and one westbound from Montreal.

MSC Annick viewed from the stern shows the large structure added to the after side of the funnel to house the exhaust gas scrubber.
MSC Annick an oft renamed veteran ship, built in 1998, and with a capacity of 3987 TEU, topped up its container load for more efficient sailing. It is en route from Montreal for Barcelona. 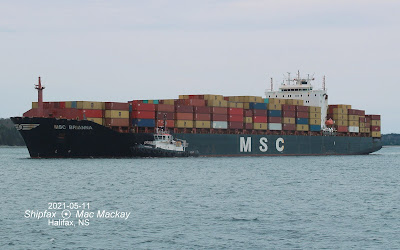 The even older MSC Brianna built in 1996, with six previous names, has a capacity of 4168 TEU. On arrival from Sines, Portugal it appeared to be loaded to near capacity. It will off load containers to reduce its draft before sailing to Montreal later tonight.
This perhaps symbiotic relationships between the two old rival ports of Halifax and Montreal may be about to change as both lines have lately been calling in Saint John, NB to test out that port's facilities and recently renewed connection with CP Rail. The shorter CP rail route to Montreal through the US versus CN Rail's longer all Canadian route from Halifax to Montreal (with a branch from Moncton to Saint John) is the potential drawing card for Saint John. Despite the longer steaming time, new pier facilities in Saint John will eliminate backlogs and reduce tidal factors for the New Brunswick port. 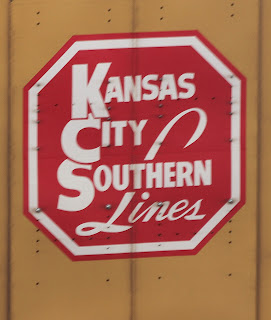 Another factor in the Halifax / Saint John / Montreal choice will be the eventual owner of the Kansas City Southern railway. Both CN and CP have bid on the line. The winner will be able to extend its North American range, thus enticing more container traffic (it is hoped).
.