The latest record setting Ultra size container ship for PSA Halifax will be arriving after dark May 17 direct from Colombo, Sri Lanka. CMA CGM Marco Polo with a capacity of 16,020 TEU will in fact be setting a new record as largest container ship to call at any port in Canada, but also at any port on the North American east coast. The ship will thus continue setting records as it works its way to New York, Norfolk, Savannah and Charleston before heading back across the Atlantic.

CMA CGM Marco Polo was built by Daewoo Shipbuilding + Marine Engineering Co, Okpo in 2012, and has up until now been confined to the Asia / Europe circuit. Its tonnages of 176,546 gross and 187,625 deadweight are the product of a 396m long x 53.6m breadth x 29.9m depth hull. As usual with ships of this size it has an "island" bridge superstructure forward of midships, with engines well aft. 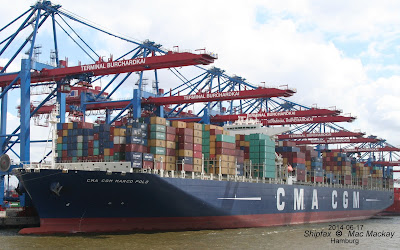 When I saw the ship in Hamburg in 2016 it had no less than nine long reach container cranes working on it at the same time. I have no idea how the landside operations were able to keep up with that much activity, nor how long the ship was planning to be in port. 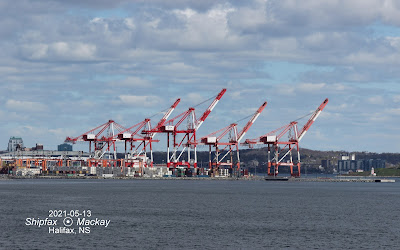 PSA Halifax has five cranes, and numerous rubber tired gantries and trucks and should be able to handle the expected load. However with about 30,000 linear feet of rail traffic resulting from this ship alone, it may be some time before an expected backlog is cleared . (The single CN track out of Halifax limits individual trains to about 12,000 feet to accommodate passing between Halifax and Moncton.)

Several other ships are due at PSA Halifax over the next few days, including Maersk Patras holding offshore and the usual callers from Tropical Shipping, ZIM and two more CMA CGM Ultra size (greater than 10,000 TEU). Combined with Cerescorp's traffic at Fairview Cove, CN Rail will be very busy for some time to come.