The Halifax company, Cherubini Metal Workers, has been contracted to build four bridges for a new waterfront development in Toronto. The company is uniquely placed to build bridge structures with one of its plants on the Halifax waterfront, incorporating its own dock. The company has built bridges for locations all over North America, including deck replacement sections for the Angus L. Macdonald bridge in Halifax, several of which have been delivered by barge.

The first Toronto bridge, for Cherry Street North was shipped by barge last fall. See posts of October 24 and October 29. That structure, weighing 375 tonnes was built to carry LRT and pedestrians 57 meters to a new island to be named Villiers Island.

Today the second bridge was loaded aboard the same barge, Glovertown Spirit at Cherubini's dock in Eisner's Cove, between South Woodside and Shearwater. 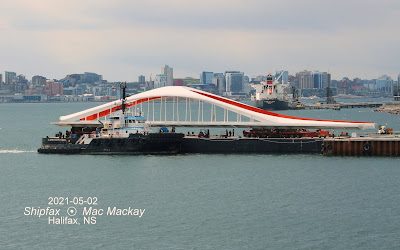 With the tug Lois M holding the barge in line with the dock, the bridge is wheeled aboard using self-propelled modular transporters (SPMTs).
The bridge contract, estimated to be worth $100 million, consists of two 57 meter spans for Cherry Street North (the second of which will be for road traffic), one for Cherry Street South, 109 meters long, and one for Commissioners Street, 152 meters long (to be built in two sections). It is likely that two more of the bridges may be delivered this year. One unpainted unit is visible in the fabrication yard.

The arrows point at a portion of another bridge, still unpainted, just visible between some of Cherubini's buildings. (If you are sharp eyed you may see another ship spotter in the photo.)
All the bridges will be delivered in the same way, by tug and barge, using the St.Lawrence Seaway system to deliver the units to their precise destination.