The second Arctic Offshore Patrol Vessel built by Halifax Shipyard began sea trials this afternoon. With the tugs Atlantic Willow and Atlantic Oak alongside the ship headed to Bedford Basin first for 3.5 hours of adjustments before putting out to sea. 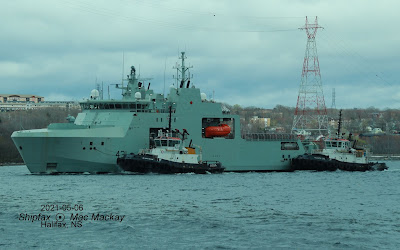 AOPV2, as it is currently called, will be named HMCS Margaret Brooke when it is commissioned by the RCN later this year. It is already wearing its pennant number 431.
The first vessel of the class, HMCS Harry DeWolf AOPV 430 has recently been in southern waters, in the vicinity of Bermuda, after previously carrying out cold weather operations during the winter. 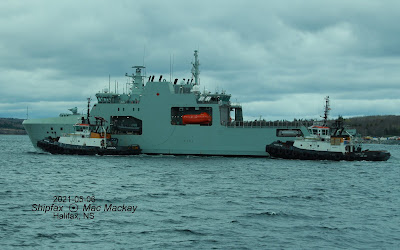 The third AOPV, to be named Max Bernays is still on the hardstand at Halifax Shipyard, minus its bow. The first two megablocks were rolled out January 22 and 23. The bow was expected to be joined in "the spring" of 2021 and a float out planned for November 2021. 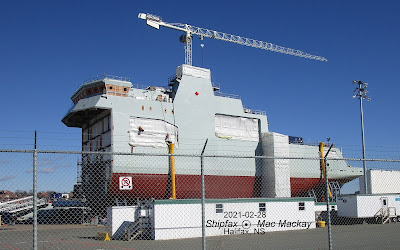 There was a general shutdown and reduced activity for several months in 2020 due to COVID, but the shipyard seems to be working full out these days, with night and weekend work.