With the proliferation of "max" ships, such as Panamax, post Panamax, Suezmax, Kamsarmax and others, I imagine today's visit of Dalian Express at Cerescorp's Fairview Cove container terminal  may represent the largest type of ship that can reach the facility in Bedford Basin. Air draft would seem to be the controlling factor as opposed to length, breadth or even draft, since ships must pass beneath two bridges, the A. Murray MacKay being the lower of the two. So would this be a Fairviewmax? 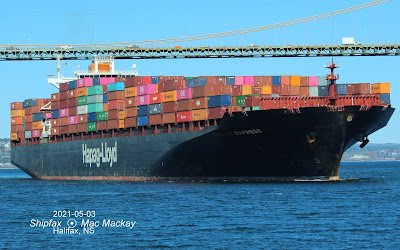 Yes, Dalian Express managed to squeeze beneath the MacKay bridge as it sailed from Fairview Cove on THE Alliance's EC5 service today.

The latest bridge for a large Toronto Island project is now loaded onto a barge and ready to leave Halifax. The second of four bridges in a $100 million project, it was built by Cherubini Metal Workers of Dartmouth at their waterfront plant. Yesterday it was rolled out onto the barge Glovertown Spirit. 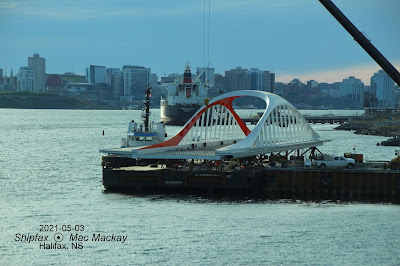 Late today workers were doing final securements and the tug Lois M had refueled and repositioned the barge at Cherubini's dock, ready to sail. There is a tentative pilot order for 2200 hrs tonight, unlike the last bridge that sailed last October in daylight.