Melfi Marine Corp SA has been operating a service to Cuba for many years, usually using up to three ships with calls every 12 days. Recently however that has been cut back to only one ship. Today's arrival of X-press Irazu represents the second last scheduled call. The published schedule shows the next call on July 7, with no calls after that.

Normally the ships call in Halifax en route to Cuba from Europe, but this time the ship is coming from Cuba heading back to Europe. As might be expected there is not a great deal of export cargo from Cuba, although its primary container port, Mariel, handled a million TEU last year. 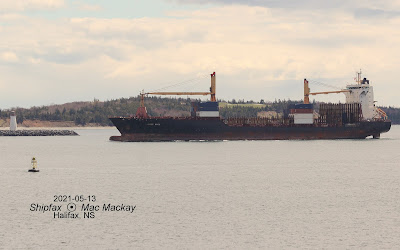 The Melfi route, called MEDCAN, is westbound from Livorno, Genoa, Barcelona, Valencia, Setubal (for Lisbon), Halifax, Mariel. However it skipped the April 30 Halifax call, going directly to Mariel. According to the current schedule it will now return from Halifax to Mariel, then sail for Livorno.

In March Shipfax reported on delays with the ship Imedghassen which was supposed to take up a slot for Melfi in January but never did, due to mechanical issues.  That left X-press Irazu to fill in, with the Macao Strait. (That ship made has apparently been reassigned to a Maersk feeder service in North Europe.) See also my post from March 6 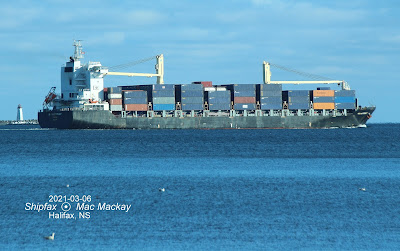 X-press Irazu is shown taking up a charter in August with the MCX-1 service of X-press Feeders, operating between Mexico and Central American ports.

Nirint Shipping BV also provides a roughly parallel North Europe / Cuba service with calls in Halifax, and recently has been carrying more cargo other than nickel concentrates, which had been the primary cargo.

The US Congress passed the Helms-Burton Act in 1996 which continued the US embargo against Cuba. Among its provisions are sanctions against the officers, stockholders and families of non-US companies that trade with Cuba, barring them from entering the US. This has included Canadians.

Cuba depends on Europe and Canada, and other countries as long as direct trade with the US is banned or restricted. Melfi Marine and Nirint make shipping connections in the Caribbean other than with Cuba, but the embargo must be a factor in their dealings.