Acknowledged as the fourteenth largest shipping company in the world, K-Line (Kawasaki Kisen Kaisha) is a major player in bulk shipping, LNG tankers, containers (through ONE - Ocean Network Express) and auto carriers. They have been reported as the fourth largest in the latter category with about 100 ships.

Today's arrival at Autoport, is one of the large newer ships in their Pure Car and Truck Carrier (PCTC) fleet. Sirius Highway, built in 2017 by Shin Kurushima in Onishi registers an enormous 75,044 gt, 20,419 dwt on a hull that is 199.96m long x 38 m width. This gives a capacity of 7,539 cars, which are loaded and off loaded over a 150 tonne capacity stern ramp and a smaller side ramp. 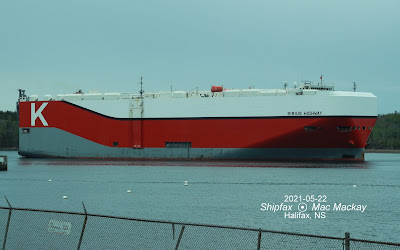 Outbound at noon time today, the Sirius Highway leaves Eastern Passage, where the summer moorings have now been set out for the Shearwater Yacht Club.

The ship is on K-Line's North Atlantic Shuttle (NAS) service, linking Zeebrugge, Bremerhaven and Southampton with Halifax, Baltimore, Charleston, Brunswick and Jacksonville. Halifax and Jacksonville are optional ports if traffic warrants. Although the NAS schedule is four sailings per month, there are no more calls for Halifax on the schedule which now runs to the end of July.