In the midst of a double barreled energy security scare, Irving Oil accepted delivery today of refined products from their blending facility in Amsterdam, Netherlands. By coincidence the ship delivering the fuel shares the name with an Atlantic Towing Ltd tug/supply vessel. 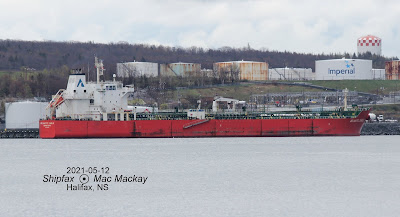 This Atlantic Eagle is a 29,266 gt, 47,128 dwt MR tanker registered in Hong Kong and owned by the low profile Korean company Cido Group and was built by Hyundai Mipo, Ulsan in 2007. It has the same name as the 1999 tug/supplier built by Halifax Shipyard, that is on long term charter to provide Emergency Towing services on the Pacific coast.

Irving Oil supplements the product the company refines in Saint John with European sourced product. With the current disruption to fuel supply in the eastern US due to a cyber attack that resulted in the shutdown of the Colonial pipeline, Irving Oil is likely in high demand on the US east coast. That demand is served by Irving's giant refinery in Saint John, NB.

In the background of the above photo is an Imperial Oil storage tank (they have neighboring facilities on the Dartmouth shore of Halifax harbour.) Imperial may also be facing pressure on Canadian supplies if Michigan's controversial governor succeeds in shutting down the Line 5 pipeline joining western and eastern Canada. The governor is concerned about a possible rupture to the pipeline where it crosses under the Mackinac Strait.

Imperial sources most of its fuel for this region from facilities in Antwerp, so we may be safe for the time being. However the Enbridge Line 5 pipeline serves many facilities in Ontario and Quebec, and a closure would cause a huge and widespread disruption.