The Narrows between Halifax harbour and Bedford Basin is a well named body of water - too narrow for two large ships to pass. When two ships are likely to meet, pilots work out passing arrangements in advance so that there is no repetition of the tragic collision of 1917.

Today's perfectly orchestrated meeting had the Atlantic Sail inbound for Fairview Cove,  clearing the Narrows and well into Bedford Basin before the outbound NYK Remus lined up for the Narrows. 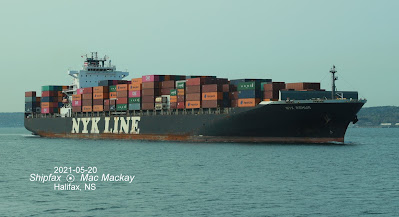 NYK Remus is a recent addition to THE Alliance's AL5 service, but was a frequent caller here five years ago or so, in the days of the G6 Alliance. 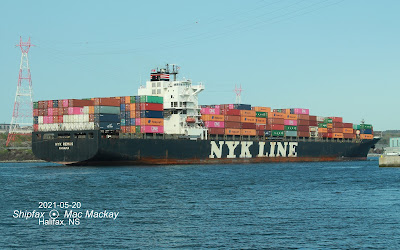 NYK Remus is one of twelve NYK ships of the same design. The 55,534 gt, 65,981 dwt vessel has a container capacity of 4922 TEU, including 330 reefers. It was built in 2009 by Hyundai, Samho.
After Halifax, the ship will skip US east coast ports and head for the Panama Canal, then call at Los Angeles, Oakland, Seattle and Vancouver before returning along the same route. It is scheduled for Halifax again July 12 en route to Southampton and Le Havre.
.
.