If Nova Scotia could claim a single iconic image it would likely be the Peggy's Cove lighthouse -destination by bus excursion for thousands of cruise ship passengers (when we had cruise ships) and tourists from around the world. Variously wreathed in fog, battered by spectacular and unpredictable waves or surrounded by serene seas, the structure, which used to contain its own post office in tourist season, was declared surplus by the Canadian Coast Guard in 2010. Built of concrete in 1915, to replace an earlier wooden structure it is officially called Peggy's Point light. The 15 meter high octagonal structure, anchored to solid rock, is surmounted by a flashing red light visible (in good conditions) from 10 nautical miles at sea (one flash of 1.5 seconds, eclipse 3.5 seconds) and marking the eastern side of the entrance to St.Margaret's Bay. 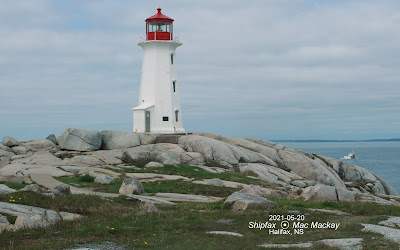 In calm conditions and a clear day, a lobster boat works off Peggy's Point, with the western shore of St.Margaret's Bay in the background.

Those conditions were not ideal during the night of May 26, 1971 when a spring storm swept through the area. The small cargo ship Hulda was making for Oakland, NS, a small port on Mahone Bay, likely to take on a cargo of dynamite for the Caribbean. It was overwhelmed by the storm and lost power. Even if the light had been visible, there was nothing the crew could do but ride out the storm and hope for a safe outcome.

Caught by huge rolling waves, the ship was swept in, stern first, over the rocks and dumped in a shallow pool, not far from the lighthouse. Fortunately, millennia of smashing seas had eroded the rocks smooth, and there were no jagged edges to rip open the hull. If that had happened the story could have turned out quite differently.

By morning the storm had passed, the ship was sitting in a placid little inlet of its own and all aboard were safe. When they could see where they were I imagine they were amazed. They were well away from open water, in a shallow lake, surrounded by smooth granite shores, lacking several feet of clearance over rocks to get back to open water. 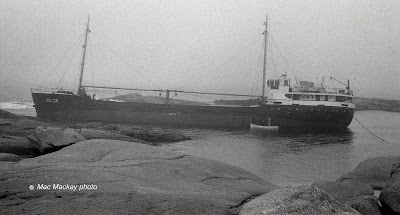 They were able to row ashore quite easily using their lifeboat, but it was obvious that the ship was going nowhere. It soon became its own tourist attraction, rivaling the nearby lighthouse for a time. However the decision was made that the wreck had to be removed. Any future storm moving through would likely wreck the ship, creating a huge mess in a pristine preservation zone. Workers soon cut up the ship in place, burning off the fuel, and leaving no visible trace of the strange event. 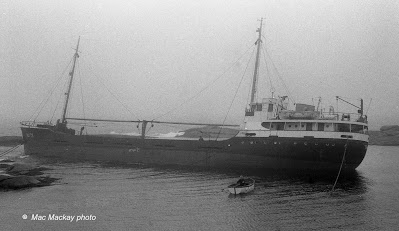 Hulda was built by DeGroot + Van Vliet in Slikkerveer, Netherlands in 1955 as Heemskerk. In 1970 it was sold for trade in the Caribbean, renamed and registered in Georgetown, Cayman Islands.