My observation Wednesday May 6 that the third Arctic Offshore Patrol Vessel was "without bow" was only true for a day or two. I noted today (May 9) that the bow of the future HMCS Max Bernays is now in place and aligned. 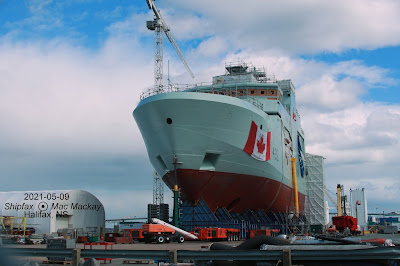 Still with its Self-Propelled Modular Transporters (SPMTs) in place, final adjustments may still be underway before welding begins. These large module moves often take place on weekends so as not to disturb the normal daily activities of the shipyard. 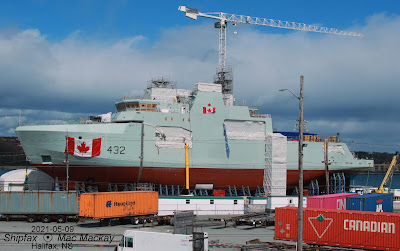 Seen from Barrington Street, AOPV3 is now looking like a ship.
Also in the North End of the harbour CSL Tacoma is getting some maintenance work at Pier 9C.

The work likely involves replacement of the conveyor belts in the self-unloading system. The rubber belts take a lot of wear and tear handling cargoes such as aggregate.
With such a large ship at Pier 9C, the Narrows certainly appear narrower... 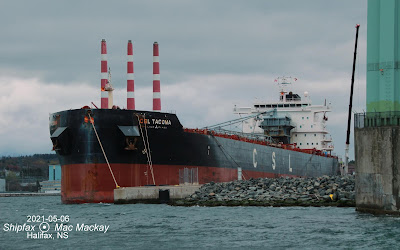 ...particularly when there is a big ship like Atlantic Sun coming through as there was this afternoon.

The five ACL sister ships are the largest (in terms of tonnage and dimensions) to use the Narrows on a regular basis. There are usually two of the ships in port each week - one eastbound and one westbound on their transatlantic service.
.