To and From Newfoundland

There were two Canadian ships in Halifax today, May 23, one arriving from Newfoundland and one departing for Newfoundland. These were not the regular container RoRo ships Oceanex Sanderling and  Nolhan Ava that run weekly services to St.John's and Argentia respectively, but were more specialized carriers.

First the arrival. More specifically it was the Articulated Tug / Barge combination Leo A. McArthur (the tug) and John J. Carrick (the barge) operated by McAsphalt Industries as an asphalt and heavy fuel carrier. The pair was in Halifax earlier in the month with a cargo of asphalt, then went on to Saint John, NB where it took on more asphalt for Holyrood NL. It then headed to Botwood, NL where it appears to have loaded cargo for McAsphalt's terminal in Eastern Passage.

Leo A. McArthur pushing in the stern notch of the John J. Carrick. Although technically a tug, it remains connected to the barge even at sea and rarely if ever tows.
Both tug and barge were built in China in 2009 and delivered in 2010, with the tug carrying the name Victorious. It was renamed in 2017 in honor of one of the founders of McAsphalt Industries. The high heat cargo barge, named for the other founder of McAsphalt, has a capacity of 11,100 cu meters (70,000 bbls) and had boilers to keep asphalt and similar cargoes in the liquid state.
McAsphalt recently announced they are returning to China for construction of an asphalt tank ship with a 11,700 cubic meter (73,600 bbls) capacity. To be powered by LNG/LBG it will also have battery storage capacity.

The departure for Newfoundland is the familiar self-unloading bulk carrier  Algoma Mariner . Also built in China, also in 2009 and delivered in 2011, it predated the company's Equinox class. It is built to Seaway maximum size, and to coastal classification. 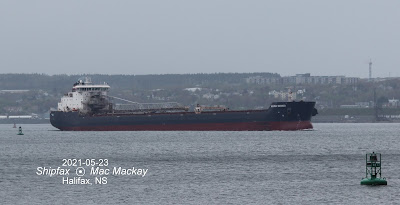 The ship arrived in Halifax May 21 with a cargo of wheat loaded in Thunder Bay. It departed the Lakehead May 12, made a service stop at Port Colborne May 16, and exited the Seaway May 17.
Its next port is given as Stephenville, NL, but is likely St.George's, on the south shore of Bay St.George, opposite Stephenville,  where it will load gypsum from the Ace quarry, located at Flat Bay. There are huge gypsum / anhydrate and salt deposits in the area which are the subject of recent redevelopment interest. The open pit gypsum mine, opened in 1952, was closed in 1990 but re-opened in 2018. There is also a large tailings stockpile from previous mining operations from which gypsum could be reclaimed.
.