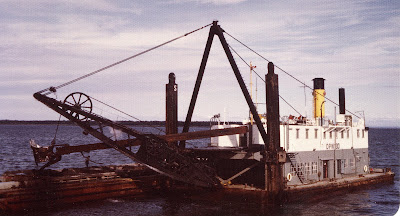 If a dredge can ever be termed remarkable, then the D-6 is it. It arrived this morning in tow of the veteran tug Swellmaster, along with the scow HD-9 (with the workboat Irving Chestnut cradled inside) and the tug Atlantic Tamarack. The small flotilla came all the way from Montreal where owners Harbour Development Ltd ( see http://www.harbourdev.com/ ) had been working off and on in the St.Lawrence Seaway. The whole works tied up at pier 7 along with other units of the Harbour Development fleet. 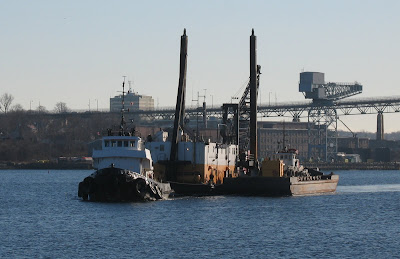 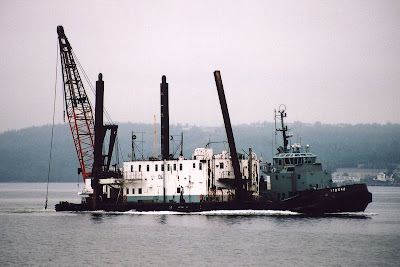 3. After eight years in layup, D-6 looked a little scruffy when on loan to the navy September 9, 2006. CFAV Glenevis has her on the hip following work in Bedford Basin. 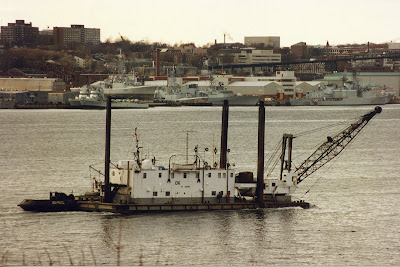 4. D-6 arrives in Halifax for the first time November 23, 1996, with Swellmaster alongside, lining up for Dartmouth Cove. 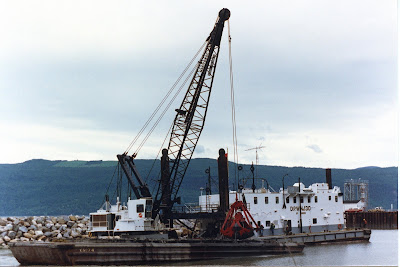 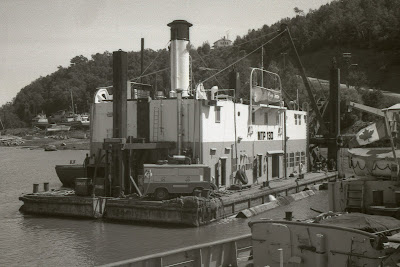 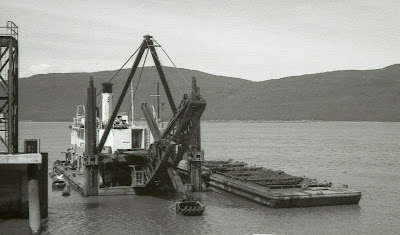 7. MTP No. 130 takes a break while the ferry berths at Ile-aux-Coudres, August 18, 1978.
D-6 began life in 1911 in Sorel, QC at Cie Pontbriand, where her hull was built. She was then towed to Montreal where her first owners, the Harbour Commissioners of Montreal, fitted out all her dredging plant, including a 2 cylinder, non-condensing steam engine with 180,000 lbs pull, and a 7 cubic yard boom spoon dredge. She was named HCM Dredge No.6 and went to work in 1912 in the port area, which was undergoing a huge expansion.
In 1938 the National Harbours Board took over responsibility for the Port of Montreal and the dredge was renamed NHBM Dredge No.6, and it continued work in the port, maintaining harbour depths and expanding the port areas.
In 1949 the (federal) Department of Public Works took over dredging and the dredge was again renamed, this time PWD No.130. She was assigned to work all along the St.Lawrence River. In 1966 there was another renaming, in line with all other Public Works plant. The initials were reversed, to be DPW No.130.
Interestingly, because the dredge worked exclusively in Quebec, where the working language was French, her name appeared for a time in translation on her sides, as MTP No. 130. (for Ministère des Travaux Publiques Numero 130.)
She continued to work up and d0wn the St.Lawrence, as far east as Matane in my observation, and possibly farther afield than that. Finally in 1985 her steam plant was considered to be past its prime (I am sure the original had been replaced with a condensing type, and she probably had been reboilered more than once.) She was then lengthened from 104 ft to 135 ft, to provide a platform for a new 2oo ton Manitowoc Vicon diesel crane with clamshell bucket arrangement. She was entirely rebuilt at that time, with new accommodations, shops and other facilities.
In the mid 1990s the Department of Public Works decided to get out of the dredging business, and put their entire fleet up for sale. In 1996 DPW No.130 was renamed D-6 (dredge 6) and was quickly snapped up by Harbour Development Ltd. She arrived in Halifax for the first time November 23, 1996 (in tow of Swellmaster of course) and left the next day for Saint John.
She soon returned to Halifax and was mothballed until 2004 when the Canadian navy borrowed her for some mooring anchor work in Bedford Basin at their research barge. She was idle again until August 2006 when she left port (again in tow of Swellmaster) for work in the Seaway, where she has been until now.
Despite being 99 years old, she is still in tip top condition. She was excellently cared for by the DPW and was thoroughly modernized. One interesting hold over is the radial arm davits she carries for a lifeboat. This are rare as hen's teeth these days.
It seems very likely that she will see her 100th birthday with ease.
.
Posted by Mac at 8:30 PM