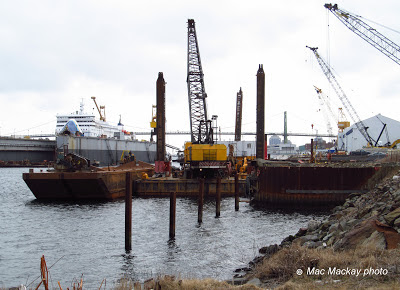 There was another shipbuilding announcement in Halifax today. Despite the supposed "depoliticization" of the National Shipbuilding Procurement Strategy for major Canadian ships, the event was another opportunity for the government. The first word in the title of the Press Release is "Harper", so you will understand how little it really had of any substance in it. In fact it was an outline of a process that, similar to the one on the west coast, was short of detail.
If read in its entirety : http://news.gc.ca/web/article-eng.do?mthd=tp&crtr.page=1&nid=724329&crtr.tp1D=1
it states that the first two of seven work packages of the Definition Contract have been awarded. These packages are for managing the contract and the first of three engineering design packages for the Arctic Offshore Patrol Vessels.
The announcement was quite free of any detail on how many ships will be built and who will be designing them. We understand that the designers are to be Odense of Denmark.
Reference was also made to the $300mn upgrades to Halifax Shipyard, which will be carried out at no cost to Canadian taxpayers. That work has already started as the proliferation of construction cranes at pier 6 will attest. The arrival on the weekend of the dredge Cranemaster and dump scow HD 7 and workboat Atlantic Tamerack also signals a start to the dredging component of the work. The tug Swellmaster brought in the dredge and returned again to Saint John.
Posted by Mac at 8:10 PM