Anchorage space is rarely at a premium in Halifax, but with two large tankers at anchor in the lower harbour, it was  necessary for an autocarrier to anchor in Bedford Basin.

First in was the Canadian shuttle tanker Jasmine Knustsen, arriving yesterday for a couple of days maintenance. The 80,918 gross/ 148,644 deadweight tonnes ship is anchored north of George's Island, leaving space for only a small ship in the northernmost anchorage.

Meanwhile at number one anchorage, reserved for short term and deep draught visitors, the full laden crude oil tanker Princimar Integrity is awaiting Canadian Food Inspection Agency clearance for Asian gypsy moth before she moves into Imperial Oil to discharge. The Suezmax tanker is a 2012 product of Samsung's Koje shipyard in South Korea. At 81,326 gross/ 158, 529 deadweight, she is comparable in size to Jasmine Knutsen but lacks all the bow loading gear of a shuttle tanker. The ship operates in the Stena Sonangol Suezmax pool of tankers, managed out of Houston TX. Ownership resides with Principal Maritime an operating arm of Apollo group, based in Southport, CT. Interestingly the ship is managed by Bernard Schulte Ship Management, based in that iconic British seaport of South Shields. Once the home of numerous British builders and shipping companies, it was also the home of many seafarers, until the collapse of the British shipping industry in the 1970s.Despite all this the ship flies the flag of the Marshal Islands, a favourite offshore register for American controlled tankers.

Forced to go north to Bedford Basin the autocarrier Höegh Masan, is also awaiting CFIA  clearance before heading to Autoport to unload. Although bearing the name of the Norwegian shipowner Leif Höegh, the ship is managed by the Danish AP Moller-Maersk group of companies and flies the flag of Singapore. Built in 1998 it has a capacity of 4300 ceu (European cars) with a gross tonnage of 44,219. After leaving Halifax the ship will travel to New York, Baltimore, Jacksonville Galveston, then the West Africa ports of Lagos, Cotonou, Tema and Sagunto. These secondary routes are served the smaller and older members of the autocarrier fleets.

Despite the fact of Easter Sunday both container piers were also working ships. Halterm had Zim Colombo (see Halifax Shipping News http://blog.halifaxshippingnews.ca/2013/03/big-waves-broken-containers.html for more on her visit) and Fairview Cove has OOCL Oakland, a post Panamax ship.
With the big ships in the lower anchorages, OOCL Oakland passed west of George's Island outbound, giving a rare chance for a closeup photo. 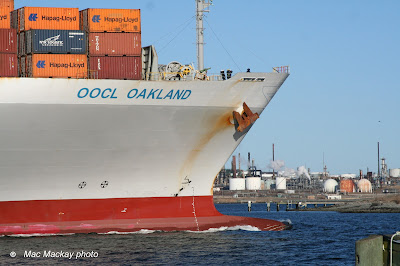 7. The pilot door stands open ready to disembark the pilot.

8. Chebucto Pilot paces the ship, but will soon move out ahead.
Posted by Mac at 7:14 PM