1. Tug Atlantic Willow took up a stern tethered escort position off George's Island, and assisted all the way into the Novadock.

The coastal tanker Dara Desgagnés arrived in Halifax this morning at reduced speed and went directly into the Novadock floating drydock at Halifax Shipyard. Earlier in the week the ship had attempted to leave its berth at Sandy Beach (Gaspé harbour) in ballast and in heavy ice. As a result it damaged its steering system and went back alongside. It was later released by CCGS Terry Fox and proceeded directly to Halifax for repairs.
The ship was built in 1992 for Rigel Chem Elbe Ltd by MTW Schiffswerft GmbH in Wismar, Germany as Elbestern and came to Halifax November 13, 1993 (after a visit to the Great Lakes) and was reflagged to Canada and renamed Diamond Star and registered in Halifax.
It continued to sail for Rigel's Canadian operation, eventually under long term charter to Petro-Nav to carry Ultramar products from their refinery in St-Romauld, opposite Quebec City. 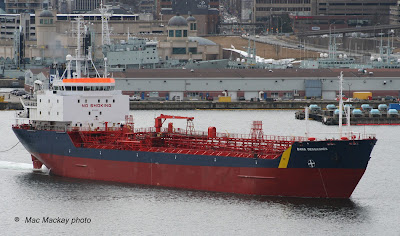 2. As the ship passes HMC Dockyard, its ice breaking bow stands out, the ship is carrying minimum ballast so that it can enter drydock.

In 2010 it was bought outright (along with its two sisters) by Groupe Desgagnés, the parent company of Petro-Nav, and was renamed Dara Desgagnés. It is heavily built for work in ice, and it is surprising that it would acquire this type of damage.

3. The ship is fitted with an ice knife over its rudder, which deflects ice, but only when the rudder is submerged and in the centre line position. 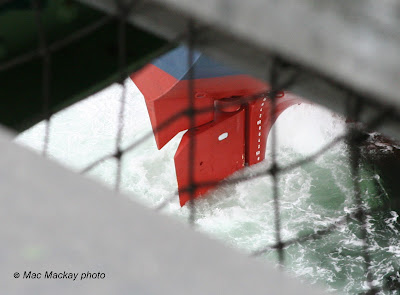 4. A photo taken through some security netting on the underside of the Macdonald bridge, shows that the rudder is off centre several degrees- jammed by the ice.


Post Script:
After a very short time in the dock, Dara Desgagnés moved (or was moved) to anchor. It will go on the dock again tomorrow morning.
Posted by Mac at 6:05 PM