Oceanex Sanderling rolls in for the seond time this week 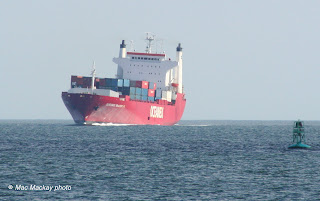 1 and 2 There is still a significant swell outside Meagher's Beach.

As previously reported Oceanex will now be calling in Halifax twice per week due to large cargo demands for Newfoundland. With improving weather Oceanex Sanderling should be able to squeeze in the two calls in a week. Its first arrival this week was an overnighter Monday-Tuesday, calling at Autoport only. I did not see the ship on that call, so I don't know if loaded only cars for Newfoundland or if it took some other RoRo. Normally at this time of year there is a huge demand in Newfoundland for new cars and trucks, and rental cars for the summer. Added to the large demands of several construction mega projects, the ship will be kept busy for some time to come.

This afternoon the ship arrived and went directly to Autoport. It will move to Halterm this evening. 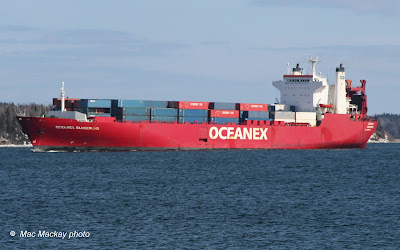