New ferry on the horizon

On Tuesday night's meeting, Halifax Regional Municipality Council will be asked to award a tender for a fourth harbour ferry. To supplement the Woodside route, proving more peak hour crossings, and for additional back-up during refits, the new boat will be an update of the current design. That design is owned by the HRM jointly with the original designers, E.Y.E. Marine Consultants Ltd. 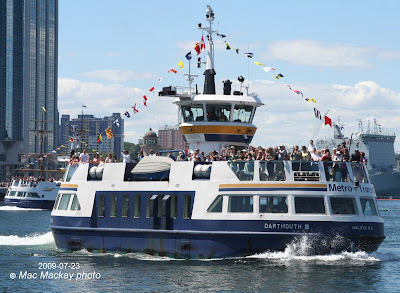 The design of the ferries (along with the pontoon docks at the terminals) was developed for the construction of the original pair, Halifax III and Dartmouth III  built in 1978 by Ferguson Industries Ltd of Pictou, NS. The third ferry, Woodside I, to essentially the same design, was built by the successor company Pictou Industries Ltd in 1986.

Although there was interest shown by other builders, there was only one bid for the new ferry, and it was submitted by A.F.Thériault & Son Ltd of Metéghan, NS for $4,158,299.96 (net HST included) [the HRM gets some rebate on the full HST].

At last week's Council meeting there was a contract award of $59, 255.29 (net HST included) to Voith Turbo GmbH for propulsion parts for the autumn 2013 refit of Halifax III. Despite high initial cost the Voith propulsion systems allow the ferries to crab in alongside their docks and have proven to be ideal for the type of work the ferries do.

Now all we have to worry about is the choice of names. That should take up a big chunk of some future Council meeting. So in the interest of effective Council time management,  here are the choices in order of preference:
Names NOT to call it: