1. Seas roll in with Chebucto Head in the background.

For a second day the Port of Halifax saw no piloted arrivals or departures due to dangerous sea conditions at the pilot station. Stiff winds for the last several days have built up seas that would make it unsafe to embark or disembark pilots.

Yesterday's sole departure was the Oceanex Sanderling which does not require a pilot since her master has a pilotage certificate for Halifax.
One intended departure, Zim Barcelona, left pier 42 Halterm yesterday morning and went out to anchorage west of number 1 anchorage. Surely a rare sight to see a containership anchored there, but since there are no arrivals or departures scheduled it is not in the way. Also the St-Pierre RoRo Fusion moved to anchorage yesterday afternoon.

3. The pilot boat Capt. Alwin G. Soppitt returns to port after checking on conditions off Chebucto Head. Zim Barcelona will have to wait at least until morning.

Meanwhile the containerships Zim Rio Grande and OOCL Shanghai (both due March 8) and the bulker  Wadi Alarab (due March 7) are cooling their heels well offshore until tomorrow morning when conditions may permit their safe arrival.
Things are deceptively calm within the harbour, allowing repairs to continue on Nordpol Friday, with the ship taking bunkers today while workers take the day off. 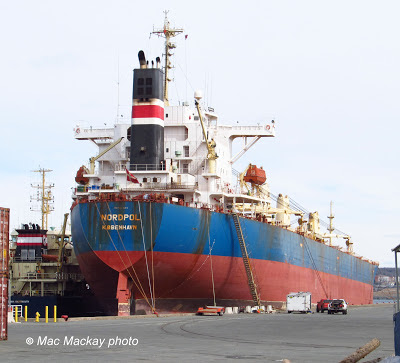 4. Nordpol is ballasted down by the bow for stern repairs, but takes bunkers anyway. Panamax ships have Panamax size gangways.

Speaking of repairs, it appears that CCGS Louis S. St-Laurent is receiving less than a full scale repair job after her collision off Sydney. From the looks of the work going on right now, she is being patched up to go back to sea, with more extensive repairs to be done later, if at all. 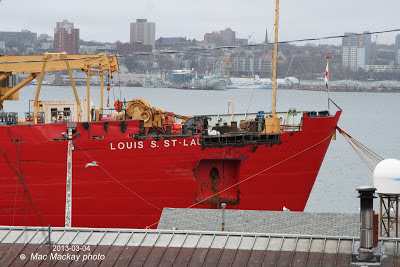 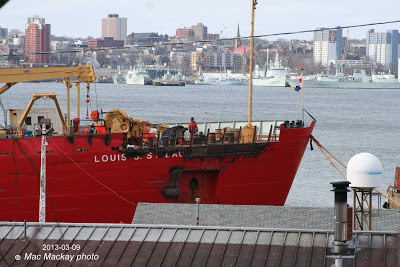 On Monday (upper photo)  a section of damaged rail has been cut out, and some distorted deck too. By this morning (lower photo) new plate has been welded in, and stanchions are back in place. There has been some patching work around the anchor pocket but, it appears to follow the line of the dent. Further aft, where damage appears to be somewhat less severe, no exterior work is evident..
Posted by Mac at 10:31 PM