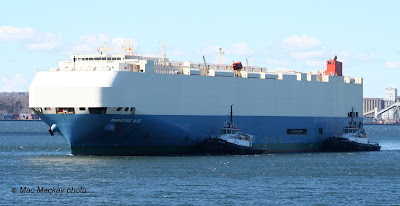 1. Tugs have guided the ship round Ives Knoll and are passing Indian Point headed into Eastern Passage.
Business is once again picking up at Autoport after a lull early in the year. Today's arrival of Paradise Ace during daylight hours allowed for a rare chance to get photos of the ship actually arriving.
Built in 2004 by Mitsubishi Heavy Industries in Kobe, Japan, the ship is one of a dozen or so sister ships of the same class, measuring 60,175 gross tons with a capacity of 6400 cars.
It is part of the 100 strong Mitsui OSK Line car carrier fleet.(Mitsui operates more than 800 ships altogether.) As pioneers in the pure car carrier business they account for something more than 20% of all car shipments world wide.
It appears that Autoport is expanding on the land side, since a huge swath of land has been cleared behind the current car storage areas. 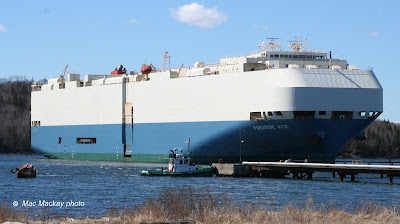 2. As the ship turns off the McAsphalt (formerly Dook's) dock, the tug Roseway stands by to take headlines to two mooring buoys. This is one of only two berths in Halifax to use line boats (the other is Nova Scotia Power in Tuft's Cove.)

With today a statutory holiday (Good Friday) the ship did not start working cargo immediately. It will unload tomorrow and sail in the evening.
Posted by Mac at 10:17 PM