I did not expect Irving Shipbuilding to show much sentimentality when they started work on the pier 6 side launch facility. The incredible mobilization of cranes is certainly notable, and work is gearing up rapidly.
Little known perhaps are a few artefacts that will be worth watching.
First is this old orange peel grab: 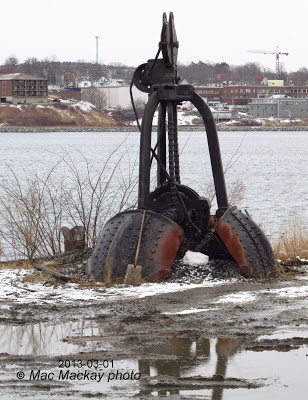 Left over from the coal operation which Dosco carried out at pier 6, the grab has been there as long as I can remember. When Irving Shipbuilding took over Halifax Shipyard, the grab was given a coat of paint, and largely ignored ever since. It is a large piece of old technology and would be a shame to lose. 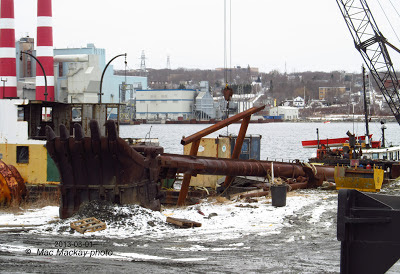 2. Obsolete shovel will certainly be going to the scrap yard.

Harbour Developments Ltd lost the dredge Shovelmaster off southern Nova Scotia in 2008, but I believe this shovel was formerly part of its gear. There are no dredges of this type working in eastern Canada any more - they are all clamshell dredges now,  so this artefact is perhaps unique.

Last and most intriguing to me, they started this week to cut down the derrick scow Channelmaster.


3. Work has started cutting up the deck house.

Harbour Development have been the owners of this unit since about 1988 when they acquired it from Sceptre-Riedel-Dawson, successors to Scetpre Dredging, a company that tried to pick up the pieces after the collapse of J.P.Porter and Co in 1977. It was Porter that  had no less than Canadian Vickers of Montreal built the craft as Hamilton 56 in 1956. Fitted with a 6 cubic yard clamshell crane ( very likely steam powered) it was built for some important work in Hamilton, ON, but scandal surrounded awarding of the contract  and continued on and off to dog Porter until the end.
In 1977 when Porter's fleet was laid up I photographed Hamilton 56 at their base. 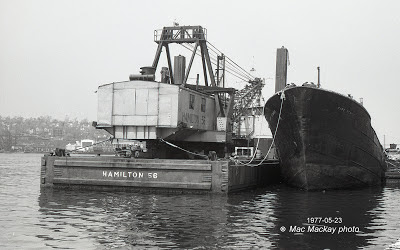 4. In 1977 the scow was still in serviceable condition.

It was towed out when Sceptre took it over and eventually worked in the Magdalen Islands and Dalhousie, NB, but returned to Halifax in August 31, 1993, towed in by Irving Hemlock.(now Swellmaster)
At that point Harbour Development removed the ancient crane and it was renamed Channelmaster. 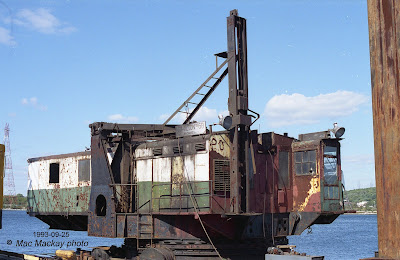 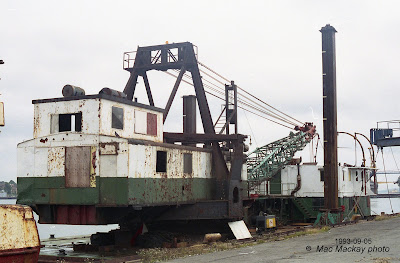 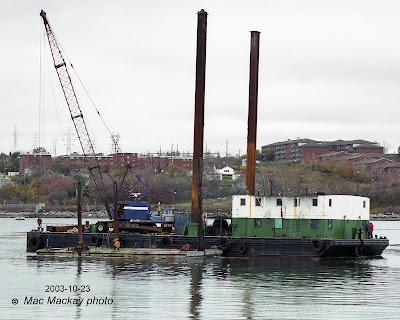 4., 5., 6. By 1993 the old crane was ready for scrap.  Alongside in the lower photo is Mighty Master ex  DPW  No.16 dredge, de-registered in 1998, sunk in Hurricane Juan in 2003 but still in existence at pier 6, as a landing platform. Channelmaster continues to carry the graceful davits for a lifeboat.

Since then it has carried a couple of different crawler and truck cranes, and has had some quite large spuds (the new spudding winches came from the CCGS Louis S. St-Laurent). It has worked around Halifax Harbour, but also in Saint John from 2005-2006.
Perhaps remarkably the original "builder's plate" can still be seen on the after house. Had it been bronze it would have disappeared long ago, but as a crude piece of welder's art it has survived - but for how much longer? I will continue to watch as this work unfolds.
Posted by Mac at 10:18 PM