On March 31, the Halifax based frigate HMCS Toronto seized a boat load of heroin in the Indian Ocean. Since January the ship has been part of Task Force 150, an international anti-terrorism patrol on The Indian Ocean, Red Sea and Gulf of Aden. The heroin, weighing 500 kg, and valued at over $100mn on the street, would have been used to fund terrorism activities according to official sources. 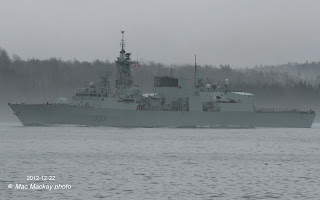 1. Inbound, HMCS Toronto has run the dynamic sound range off York Redoubt, and is coming in to the harbour to turn for another pass in December 2012. 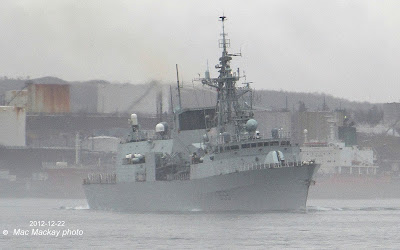 
Meanwhile, off Oman, the bulk carrier Atlantik Confidence suffered an engine room fire on March 30. USS Nicholas (FFG-47) was tasked to respond and flew off a helo. Once on scene it found the crew (all from Turkey) had safely abandoned ship and were picked up later by the Turkish tanker YM Pluto. Nicholas sailed out of Norfolk VA, also in January, and has been on anti-piracy patrol off the Horn of Africa in the NATO Standing Group 1.
Atlantik Confidence was in Halifax November 24, 2012 to change flag and take bunkers.
http://shipfax.blogspot.ca/2012/11/atlantik-confidence-changes-port-of.html
The ship is now reported to be in a sinking condition. There are suggestions of irregularity in the incident. Photos show the ship down by the stern, but with no smoke or flames.  Reports also state that the ship is now registered in Liberia. There has been no news about possible salvage.
http://www.seanews.com.tr/article/ACCIDENTS/98443/Atlantic-Confidence-Fire/
Posted by Mac at 8:14 PM