Chebucto Pilot back to work 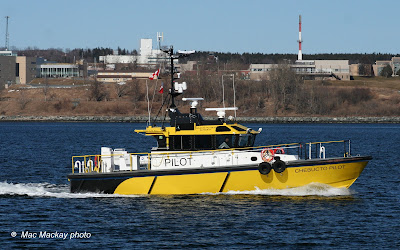 1. Chebucto Pilot makes a slow speed start on its run out to the pilot station this afternoon..

2. Once abeam of George's Island it digs in to stay well ahead of the autocarrier Paradise Ace.

Since the arrival in Halifax of the new pilot boat Captain A.G.Soppitt in January, the Halifax sister Chebucto Pilot has not been doing much work, until today.
The Captain A.G.Soppitt is intended for eventual deployment to Saint John, NB, but has obviously been undergoing its break in period here, closer to the Abco shipyard in Lunenburg, where it was built. I imagine this has given the Atlantic Pilotage Autority the chance to make some adjustments to Chebucto Pilot too - perhaps in coordination with the shipyard.
The third boat, A.P.A.No.1 has been operating as back up. 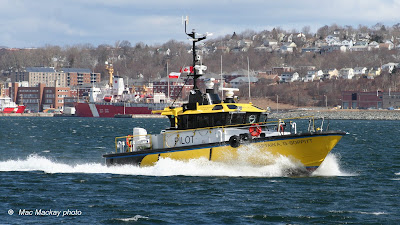 3. Sister boat Captain A.G.Soppitt moves along smartly to catch up to a departing ship on Thursday. It will eventually be stationed in Saint John, NB.
Posted by Mac at 8:06 PM