CCGS Louis S. St-Laurent returned to Halifax today, looking battered but not beaten. At first heading for the BIO dock, it was not until they were in visual range that they discovered that there was no berth for the ship. They went out into Bedford Basin, possibly to anchor but then headed to the old Coast Guard Base.
The hasty repairs conducted earlier this month after colliding with Maple Lea in Gulf ice are still very much evident, and look temporary. After her repair stint in Halifax February 27 to March 14 the ship returned to the Gulf and assisted the tanker Acadian into Charlottetown March 16-17.

1. The Louis heads inbound, showing her "good" side.
2. After turning in the Basin she heads for the old CG base, showing her bruises. That is CCGS Hudson in the background, at the berth that Louis wanted.
3. There were temporary repairs to part of the ship's rail, anchor pocket, and and prime painted plate area. Other areas of the rail and hull were not repaired after her recent accident.

Although the CCGS Louis S. St-Laurent was launched in December 1966 and commissioned in 1967, her bow is much newer. The bow was completely replaced during the ship's major 1987-1993 refit at Halifax Shipyards.
4. The new bow was in place and newly painted early in 1993. 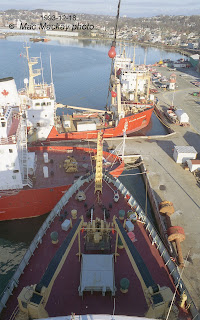 5. In a view of the new bow from the bridge later in 1993, CCGS Terry Fox, Sir William Alexander, Provo Wallis and Tupper look like toys.

I still have not received any reports on how the infamous crease occurred on the Louis's port  starboard side from aft of midships.