1. Atlantic Superior sails with a cargo of gypsum but only loaded to the permissible St.Lawrence Seaway draft of 26'-3".

Wintering in Halifax gives a spinal shudder to all but a few hardy natives, migrating northern bird species and the odd Great Lakes ship. Atlantic Superior seems to be one of the latter that likes Halifax as a winter roost when the St. Lawrence Seaway is closed.  (It spent the winter of 2011-2012 in Halifax also and was drydocked and repainted during that stay.)
This winter the ship arrived December 29, 2012 and has spent that time at pier 25-26 undergoing maintenance, including a complete refinishing of its self-unloading boom. On Monday the ship upped and moved to National Gypsum where it loaded a cargo for the Great Lakes (the Seaway opens March 23).
The St.Lawrence Seaway draft for this year is 26'-3", and may increase to 26'-6" if conditions allow.

2. During January the ship's workers repaired and refinished the ship's unloading boom under cover of a translucent tarp. 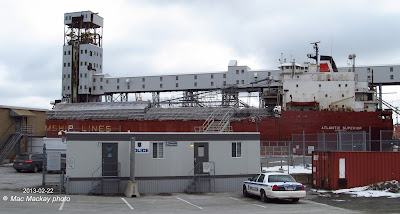 3. By late February some of the work was completed (under the ever watchful eye of the Police) and was unveiled. The unloading hopper was not repainted - that will be left to the ship's crew.
Posted by Mac at 8:51 PM