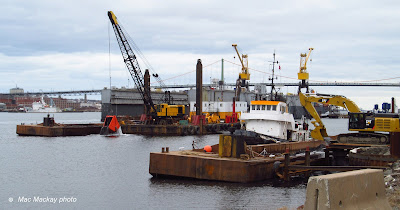 Environmental dredging got underway this morning at pier 6. The work is related to the Halifax Shipyard's major expansion which will allow it to build ships under the new National Shipbuilding Procurement Strategy.
The site was ground zero of the Halifax Explosion in 1917 and until 2008 the location of a major sewage outfall, not to mention more than a century of industrial activity. As might be expected the bottom is strewn with debris, and sludge containing heavy metals and other contaminants.
The dredge Cranemaster will dump the spoil into sealed scows HD6 and HD7 that will be unloaded at the landing on the right in the photo above.The spoil will then be cleansed using a sophisticated process operated by Clean Earth Technologies. See http://www.cleanearthtechnologies.ca/
Once the area is dredged to the required depth a series of concrete cribs will extend the face of pier 6 well out into the stream. The area will be filled and surfaced as a roll out area for the new ships.
Tugs Swellmaster and Atlantic Tamarack will attend the dredge and wrangle the scows. 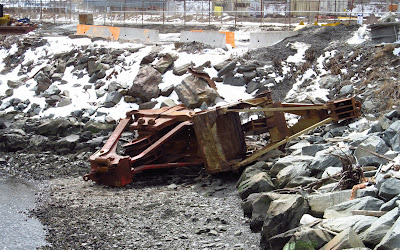 Low tide - time for clams. These veteran dredge clam buckets are being stored at the shore line until they are needed or scrapped. (2012-03-23 photo)
Posted by Mac at 6:20 PM