A walk out on the Angus L. Macdonald bridge on Thursday allowed for a good look down on part of HMC Dockyard.
First in view was CNAV Firebird, apparently fresh from its refit in Shelburne and looking quite sharp. 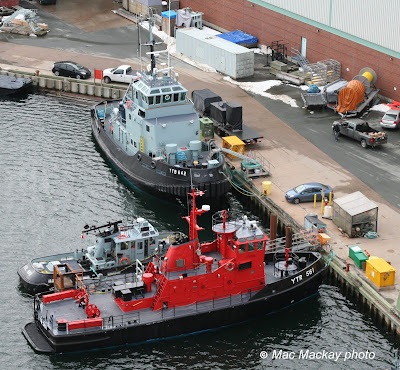 It has not returned to service yet, and harbour safety patrols are being conducted by Glen and Ville class tugs. The safety patrols include several trips per day to the Defence Research and Development Corp barge in Bedford Basin.

Next up was HMCS Halifax still in the midst of its FELEX upgrades, and due to re-enter service in 2014.

Speaking of the harbour tugs, we here that Granville found the bottom in Eastern Passage the other day. There was no sign of any activity on it from the bridge. 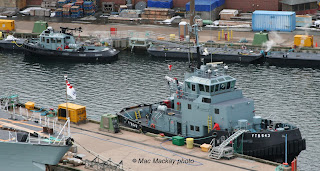 Also absent was the Glen tug Glenevis - perhaps gone off for a refit.


This morning harbour tugs moved HMCS Montreal from the Graving Dock to the Machine Ship wharf at Halifax Shipyard. Since Halifax left the yard, Irving Shipbuilding has erected a number of buildings in the area, including a three story complex at the south end of the Machine Shop Wharf.


With no shipboard power on Montreal all lines had to be hauled by hand. A cheerful group of workers on the bow struggled long and hard with the head lines to secure the ship.