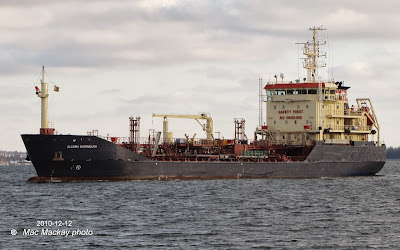 I have now heard from three sources, all of whom prefer to preserve their anonymity, that there is an uncertain future for the Halifax bunkering tanker Algoma Dartmouth. With the closure of the Imperial Oil refinery in Dartmouth in September, and the consequent absence of a source of Bunker C fuel, the small tanker has been virtually without work.
Last week it loaded some fuel at the (now) Imperial Oil terminal for CCGS Hudson, which it refueled on November 12, but that has been its only work in some time. It used to refuel container ships, gypsum carriers, large tankers and other ocean going craft that used Bunker C, including passenger ships, but that is no more. The Imperial terminal now stores only gasoline, diesel and furnace oil for local consumption. The other specialized marine fuels are no longer stocked.
One of  Algoma Dartmouth's regular jobs was refueling Algoma coastal tankers that distributed product from the refinery to various Atlantic ports. That trade has dried up now and the tankers Algonova and Algoscotia have been reassigned.
I have also been told that a contract to provide fuel to Oceanex Sanderling will be up soon, and the ship will source its fuel elsewhere.
This leaves Algoma Dartmouth without work. I can't imagine Algoma keeping the ship here if it is not needed. Where it may go, if they keep it at all, may soon be known.

The ship was built in 2007 by Yardimci Gemi Insa SA in Tuzla, Turkey as Clipper Bardolino, a name which still appears in prominent welded letters (now painted over) on her stern. It is a twin screw ships of 2,999 gross tons, 3,569 deadweight tonnes, and is double hulled with cargo heating coils.
In 2008 she became Samistal Due. Algoma acquired the ship in 2009, initially on a three year charter, and it arrived in Halifax July 27 of that year. It  was to run as a Canadian flag, non-duty paid ship, under a coastal license. With  changes in Canadian import laws in 2010 Algoma bought the ship outright. Since then she has only left Halifax once, in 2012 for refit in Shelburne. It has been based at pier 34.
Today it moved to pier 9 due to high winds in the harbour.